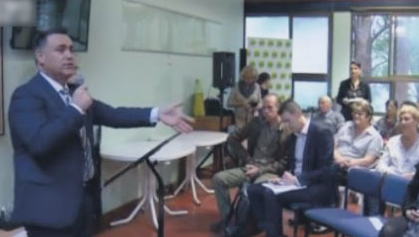 Central Coast Labor MPs have been accused of causing alarm in the community and spreading false information about the future of local TAFE campuses.

The thrust of the latest changes being made to TAFE will make it “competitive and modern” according to the parliamentary secretary for the Central Coast, Mr Scot MacDonald. “These reforms have naturally generated debate and that is healthy,” he said. “What is not healthy is the Labor shadow minister, Mr David Harris, and other Central Coast Labor MPs, spreading fear and misinformation,” he said.

According to Mr MacDonald, NSW minister for skills, Mr John Barilaro, addressed staff and students at the Gosford campus of TAFE recently. “The minister took questions and it became clear a number of people were alarmed by comments by Mr Harris inferring Gosford or other Central Coast campuses were closing now or in 2017,” Mr MacDonald said. “From the moment the reforms were announced, the Government had been crystal clear that no campuses were closing,” he said.

“It is to the great shame of the ALP that they routinely resort to negativity and falsehoods. “The NSW Government has committed record expenditure of nearly $1.9 billion to vocational education in this state. “But as Mr Barilaro announced, TAFE has to be competitive and modern,” he said. “It needs a better digital platform and its cost structures have to be as efficient as possible. “School leavers have many choices and there are close to 400 private providers to choose from in the vocational education sector. “It would be irresponsible to ask TAFE to maintain unused or not fi t for purpose assets. “It would be irresponsible to burden TAFE with unnecessary administrative costs and layers of bureaucracy.

“TAFE has much to be proud of. “It remains a trusted, valued provider of education and training. It has an important role in the Central Coast community. “We will give it the tools, structure and resources to build on that strong reputation now and into the future,” he said.