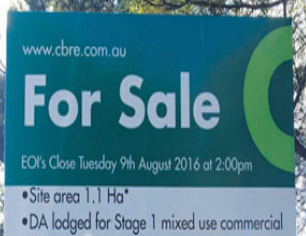 Property NSW called for Expressions of Interest (EOI) on July 5 for a partner to deliver a proposed mixed-use building at 32 Mann St, Gosford, and develop the remaining 1.1 hectares of land on the former Gosford Public School site.

The expression of interest could result on the remainder of the school land being filled with a third mixed-use building. CEO of Property NSW, Mr Brett Newman, said the EOI process will seek feedback on a mix of different development opportunities for the site, including restaurants, car parking, short-term accommodation, residential and generous open space for the community. “By partnering with the private sector, the government can deliver on its pledge to kick-start the local economy, extend and revitalise the CBD and deliver hundreds of new jobs to the region,” Mr Newman said.

According to Mr Newman, the expression of interest “seeks a developer to partner with the NSW Government to build the six storey, 7,000m² mixed use commercial building and purchase the mixed use precinct for development into a vibrant and active area connecting the Gosford CBD to the waterfront. “The release of the EOI follows the recent community drop-in sessions in Gosford, allowing the community to find out more about the government’s plans to activate this dormant site, which will inject tens of millions of dollars into the local economy. “These sessions were well attended and are part of the government’s commitment to engage with the community throughout this process,” Mr Newman said.

The NSW Government announced in April that more than 300 public service roles from the Department of Finance, Services and Innovation will relocate to Gosford in 2018 and will be accommodated in a new “A grade, environmentally sustainable building to be constructed on a portion of the site at 32 Mann Street”. “Aside from the 300- plus department jobs, the development is expected to create 90 direct construction jobs, 30 jobs in the design and planning stages and more than 330 ongoing indirect jobs for Gosford. “The DA for the mixed use commercial building is currently being assessed by the new Central Coast City Council and will be referred to the Joint Regional Planning Panel (JRPP) as the responsible determining authority.” The EOI process will close on August 9, with a preferred proponent expected by the end of 2016.