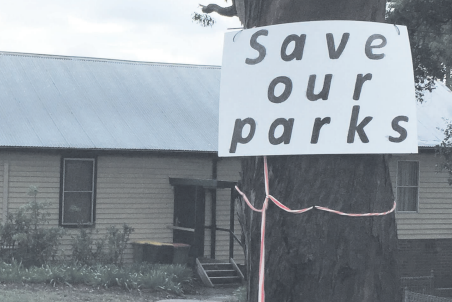 The Wamberal Community Group has started a petition to save Wamberal Memorial Hall, according to group spokesperson, Mr Richard Wells.

The petition was launched on July 2 to seek the support of the NSW minister for heritage, Mr Mark Speakman, to list the hall as a heritage item. “Central Coast Council wants to sell the historic hall and park on Ocean View Dve that was privately donated and dedicated to the ANZACs and veterans from Wamberal who served Australia,” Mr Wells said. The petition is one part of the Wamberal Community Group’s campaign to save the Ocean View Dve reserve which is listed as one of 25 parcels of community land to be considered for reclassifi cation as operational land by Central Coast Council. Community land cannot be sold, but once it is reclassifi ed as operational land, it can be sold without community consultation.

The former Gosford Council and, since its sacking, the new Central Coast Council, have failed to confi rm or deny their intention to sell the Wamberal Memorial Hall but, on July 13 the council did confi rm the hall was currently classifi ed as community land. According to Mr Wells, the Ocean View Dve reserve and the memorial hall were well-represented at the council’s public meetings to discuss the reclassifi cation of 10 parcels of community land on July 6. “A representative from the Terrigal-Wamberal Returned Services League gave an excellent speech in defence of Wamberal Memorial Hall,” Mr Wells said. “A resident who lived next to Benjamin Parker Reserve for 42 years spoke about how this and other parks are needed for the mental, social and physical needs of all residents. “A highly respected property valuer spoke about the essential importance of parks and green spaces to society and added to the desirability of the region.as a whole.

“Council is betraying the good will and memory of those philanthropic owners who privately donated land to the community. “Why would anyone donate land when the custodians of those community gifts, the council, simply want to sell it off to developers. “Council is merely pretending to “seek the views of the community” and thus pretending to comply with the Act. “The sale of these parks has never been posted on Central Coast Councils Have Your Say website nor is there an email address or online form to lodge submissions. “There is not an excess of community land but a shortfall. “To match Wagga Council for example, council would need to build a further 180 playgrounds. “That is the extent of the shortage of parks in the Gosford area alone. “There is massive community opposition to the sale of these parks as seen by protests, petitions and the media.”