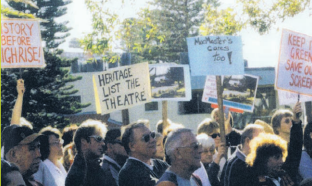 Banners held in opposition to the proposed development

A conciliation conference has been held in relation to Mr Norman and Ms Beth Hunter’s appeal to the Land and Environment Court about the former Gosford Council’s refusal of their application for alterations and additions to the Avoca Beach Picture Theatre.

The development application, originally lodged in 2012 and amended several times during the following three years, sought council approval to demolish an existing cottage and ancillary buildings, retain the existing cinema and erect a mixed-use building of three to four levels with basement car park, four new cinemas of varying capacity, gallery café, amenities and fi ve residential units. According to a media statement issued by the Central Coast Council: “The Hunters’ appeal to the Land and Environment Court was the subject of a conciliation conference under Section 34 of the Land and Environment Court Act 1979.

” The conference was held on June 17 and was attended by around 150 community members. “The conciliation conference is in a confi dential stage and has been adjourned to enable the council, advised by its expert witnesses and legal representatives in the proceedings, to consider amended plans put forward by the Hunters at the conference,” the Central Coast Council’s media statement said. “A decision will be made when the conciliation conference resumes, whether to continue the conciliation or whether the appeal will proceed to a hearing before the court,” it said. Mr Steve Fortey from the Friends of Avoca Theatre Old and New group, said the meeting was an informal court session held in the surf club. “Legal teams and experts from both sides were in attendance,” Mr Fortey said. “Avoca has never seen so many men in suits; not cheap ones either.

“Not one speaker for the development lived in Avoca, and not one addressed in any detail parking, size, Hunter Park, potential church usage or fl ooding,” he said. Mr Fortey said he had been advised by the Central Coast Council that, on July 18, a list of issues agreed upon or disagreed upon will be presented to the Land and Environment Court commissioner. “This stage will probably include consideration of further amendments made by the Hunters and it is likely some compliance issues will be solved. “It looks like they are dropping one theatre so the height and fl oor space ratios will be compliant, but water views could still be an issue. “It could well be that these amendments have to go on public display for comment.”

Mr Fortey said he did not expect a result from the conciliation process until August. “The feeling is that it will then move towards a full, formal hearing of the Land and Environment Court, on site, to settle the matter, maybe in September. “Locals might be called upon as witnesses once again.” Mr Fortey said the Friends’ group would continue to fi ght what they consider to be the overdevelopment of the cinema, “as we are dealing with the future of our precious beach. “Until they put suffi cient parking for patrons on site and leave Hunter Park and South End Park for the public, we will oppose them,” he said.

On June 17, 2015, Gosford Council wrote to Mr and Ms Hunter to inform them that their development application (DA42661/2012) had been refused for reasons relating to: fl ooding; car parking; bulk, height and scale; over-development of the site; character; view loss; and public interest. The refusal was also a consequence of the NSW minister for the environment’s placement of an interim heritage order over the theatre. “Insuffi cient information regarding heritage impact has been received to enable assessment of the impact of the proposed development on the heritage signifi cance of the existing building,” the council letter of refusal said. On November 30, the Hunters lodged an application with Gosford Council to review the development application. A report by Doug Sneddon Planning Pty Ltd outlined the basis of the Hunters’ application under Section 82A of the Environmental Planning and Assessment Act for the review of Gosford Council’s determination.

The Sneddon report outlined “council’s lack of procedural fairness” including denied requests from the hunters to be given more time to consider the report that recommended their DA be refused and errors of fact in that report. According to the report: amended architectural plans had resolved fl ooding issues; on-site parking was adequate; any exceeding of maximum permissible building heights were not unreasonable; the fl oor space ratio was exceeded by six per cent, which was “clearly within the range of variations commonly approved by council; view loss was minimal or nil; and, that the development was, in fact, in the public interest.

The Sneddon report also argued that a site-specifi c LEP to enable the land to be developed for a residential fl at building, place of assembly, art gallery, and restaurant, concurrently, made it diffi cult for the council to then argue the DA represented an overdevelopment of the site. “The proposed development will provide a significant entertainment venue for local residents and tourists in a venue which has national recognition and generating employment and economic multipliers,” the report said. By the beginning of February, over 300 submissions were made to Gosford Council, both in support of and in opposition to, the Hunter’s Section 82A review application. On February 16, following a meeting between Mr Sneddon and council representatives, Norman and Beth Hunter’s legal representatives submitted amended plans and supporting documents. The submissions have continued to roll in throughout the first six-anda-half months of 2016. Many appear to be form letters in favour of the redevelopment of the theatre that have been produced as a result of a campaign by Mr and Ms Hunter to seek public support for their proposal.