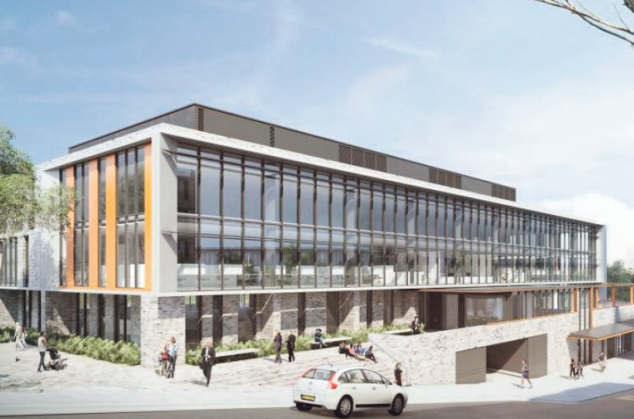 The Joint Regional Planning Panel (JRPP) deferred its decision on whether or not to approve the development of the Australian Taxation Office building on part of the former Gosford Public School site.

The JRPP, including its two new delegates for the Central Coast Council, Mr Bob Ward and Mr Ken Greenwald, held its public meeting in the former Gosford Council’s chambers in Mann St Gosford on Thursday, June 9. Eleven people addressed the panel, most to express their opposition to the development.

Mr David Abrahams, former chair of Regional Development Australia Central Coast, said: “The people in this room are Gosford’s champions, they are no rabble to be dismissed.” He said hundreds of residents had been involved in two processes to articulate a vision for the waterfront (Our City Our Future) “and I think we nailed it”. According to Mr Abrahams, the Central Coast Regional Development Corporation then chose to set aside the documents that articulated that vision and focused on selling the land of the former Gosford Public School on behalf of the state government. He said Gosford Council’s executive had also set aside the documents that articulated the community’s shared vision for the waterfront.

Mr Jack Lloyd of Umina said his concerns were that the building was to be located at the “front door of Gosford and the Central Coast. “What is located on that site has clearly got to be a building that gives something to the character of the city and has to be incorporated into the planning of the city,” Mr Lloyd said. Mr Lloyd also questioned whether the allocated 106 car spaces were enough. “The 106 car spaces is nothing like the provision allowed in other cities for mixed developments, it is way short of the parking provision that is normally made. Ms Joy Cooper called the proposed development an “ugly box of building.“This building will not link the CBD to the waterfront … it will create an area of isolated and lonely street frontage.” She said the building could be reduced in fl oor space to comply with parking requirements.

Another speaker, Ms Power, said that as a resident of Gosford, she was interested in its future and had read as widely as she could. “All documents for the school removal clearly show the site as intended for a cultural and performing arts precinct,” she said. This is a loss of crown land by stealth to private ownership. “In reality this site is iconic and a local signifi cant site at the very least,” she said.

Mr Kevin Armstrong, representing Crown Land Our Land, Gosford, said an ATO building on any other location in the Gosford CBD would have had the same impact on employment to the area. He called the proposed extension of Baker St: “Something that is not at all certain at this current time”. Mr Armstrong said ownership of the site remained “somewhat in doubt”. “The best information I can fi nd is that it was dedicated and supposedly removed in the 1970s using the Just Terms in Compensation Act that didn’t come into place until 1990s,” he said.

Ms Angelique Teraz spoke as a representative of the Gosford Waterfront Alliance Inc. As an architect, Ms Teraz outlined areas where the development application did not meet the requirements of the Development Control Plan and considerations of the risk ground water could pose to the building’s basement and structure. She questioned how the development’s disruption to ground water would be managed and its impact on surrounding properties. “How did the site undergo the process of going from being a state signifi cant site to having no master plan at all?” she asked. She said Gosford Waterfront Alliance Inc. called for “an entire analysis to retain delivery of an active mixed use precinct, to promote the waterfront and Gosford as a destination that would include a regional performing arts centre, regional park and public wharf facilities.”

A barrister, Mr Matthew Fraser, who principally practiced in the NSW Land and Environment Court, spoke against the DA on the basis that it underdeveloped the site. “What struck me, when I read the assessment report, was that there was 24 metres of undeveloped air space,” Mr Fraser said. He said that air space could be used for additional development or to make up the car parking shortfall. According to Mr Fraser, one of the objectives of the current B4 mixed use zoning for the site was to enliven the Gosford waterfront. “I suggest to the panel that that objective is not met by this development, throwing away air space when this site has uninterrupted views of waterfront. “I suggest it would be of great diffi culty for you to conclude this development was in line with the objectives of the zone.” Mr Fraser said extending Baker St for overfl ow parking was not in the public’s interest. “It does not behove a public department, in endorsing a proposal by a private developer, to endorse non-compliance, when you could have compliance so easily by better design of the development,” he said.

Waterfront cordoned off after fire