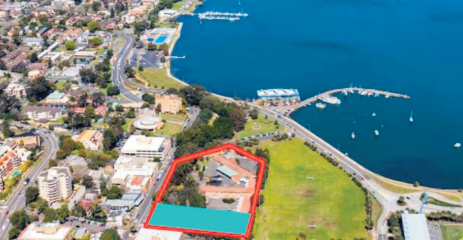 President of the Gosford, Erina and Coastal Chamber of Commerce, Ms Alison Vidler, addressed the Joint Regional Planning Panel meeting in support of the Doma Group’s development of a mixed-use building to house the Australian Taxation Office on the Gosford waterfront.

“One of our chamber’s aims is to assist and support the revitalisation of the Gosford CBD through whatever means necessary,” Ms Vidler said. Ms Vidler said the chamber had held meetings with Doma Group along with presenting information about the proposed development to its members. “The development is in line with the objectives of the 2014 LEP and revitalisation of the Gosford CBD,” she said, adding that, in her opinion, the development would not impact on view corridors or result in overshadow.

Ms Vidler said issues around parking were always at the forefront in Gosford, but she believed the parking provisions in the development application were well founded and supported, subject to Baker St being extended. She argued that Gosford and the Central Coast were missing a key worker stage, with 25 to 34 year olds forced to leave the Coast for employment. The Doma development would create job opportunities for that particular demographic because of the ATO’s secured tenancy.

“The ATO is looking to recruit the vast bulk of its employees from the local community,” she said. “Should we not back a development that will foster employment and help the area for generations to come,” she asked. “This development is shovel ready. “For far too long, we have waited for development in our capital city, to see cranes in the skylines,” she said. On the day the ATO development was announced, Ms Vidler said she received 15 calls from investors and developers seeking information about opportunities in Gosford.

Mr Gavin Edgar from Doma Group said the developer was “very sympathetic towards the community’s desire for a performing arts centre. “We acknowledge and recognise there has been a particular piece of work and a long history of what the site might be,” Mr Edgar said. He explained that Doma responded to an advertisement and that the school site had been offered as a whole site or a portion of the site. He said they had expressed interest in the development as part of a competitive public process. “Everybody in the local community had the opportunity to purchase the site,” he said.

Once Doma had been granted an option to purchase the land at an acceptable price, it was then able to respond to a call from the Australian Taxation Offi ce to provide new offi ce space in Gosford. Doma’s was one of 11 proposals considered by the ATO, and at least three involved the Georgiana Tce site that formed part of the former Gosford Public School’s land. Mr Edgar said the Doma Group had successfully delivered a signifi cant number of pre-committed office buildings elsewhere, and was currently building the national archives preservation building. “I believe we have put forward a compliant application and we are ready and prised to get started on this construction,” he said.

Having heard from all 11 speakers present at the public meeting in Gosford, the members of the Joint Regional Planning Panel decided to defer their decision on whether or not to grant consent for the development of the ATO on the Gosford waterfront. Reasons given by the panel members for deferring their decision included: a desire to get more information about the ownership of the site; concerns around the adequacy of parking provided in the application; the strategic planning history of the site including addressing the intentions of the master plan; location of an electricity substation; groundwater; heritage concerns; and tree removal. The JRPP expected that their decision would be delayed by a matter of weeks while it gathered the additional information required to make a fully informed decision.