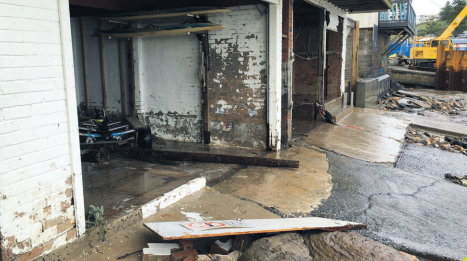 Terrigal, Wamberal and Avoca Beaches were among the local areas most affected by the East Coast low that hit on June 4 and 5.

The storm was described as the worst to hit those beachside suburbs since 1974. Over 200mm of rainfall in just over 24 hours resulted in road damage, substantial erosion and fl ooding. The damage bill at Marine Rescue, located at the Terrigal Haven, was expected to exceed $100,000. The Clan Lakeside Lodge at Terrigal sustained signifi cant damage.

Avoca Surf Life Saving Club narrowly escaped substantial fl ooding as local SES workers and other volunteers used sandbags broke new state government laws to protect the club from huge seas. Over 20,000 houses throughout the Coast lost power. Debris was strewn the length of Terrigal, Avoca and Wamberal beaches as the low pressure system combined with the highest tides of the year. Damaging winds from the North East averaged 60 to 65 kilometres per hour, with peak gusts of up to 90km her hour felt on some parts of the Central Coast.

The region experienced abnormally high tides and very heavy surf which resulted in dangerous surf conditions and caused signifi cant damage to public and private property along the coastline. Dam levels were given a signifi cant boost with almost fi ve weeks supply of water captured for the region.