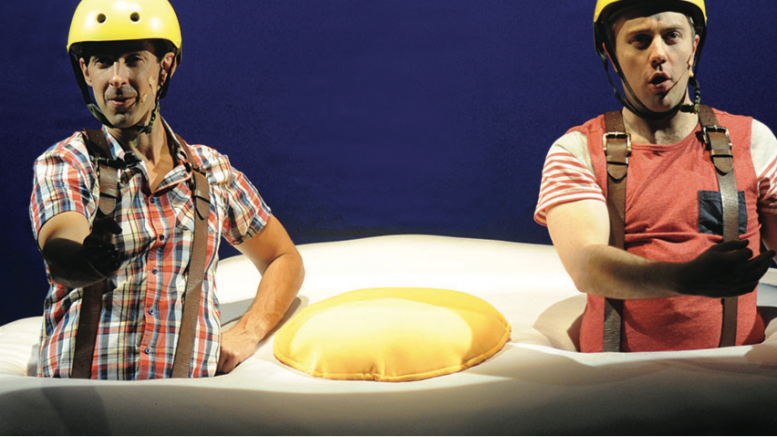 James Elliott as Andy and Drew Livingston as Terry

Andy Griffiths’ and Terry Denton’s bestseller, The 52 Storey Treehouse, hits the stage at Laycock Street Community Theatre from May 12-13.

The team behind the hit adaptations of The 13 Storey Treehouse and The 26-Storey Treehouse have come together to bring this latest bestseller to life for a national tour, following its Sydney Opera House premiere. Griffiths’ and Denton’s ever-expanding treehouse is filled with even more fantastic inventions for children to enjoy, including a rocket-powered carrot launcher, the Disguise-o- matic 5000 and a Ninja Snail Training Academy.

Gosford City Council’s Director Community Growth, Ms Judy Jaeger said these award winning stories have been sparking children’s imaginations across the nation and Gosford is fortunate to be a stop on the ‘Treehouse’ national tour. “Gosford is excited to be hosting this popular production. “The 52-Storey Treehouse was Australia’s fasting selling book ever, and the previous stage adaptations have all been incredibly successful. “We are proud to be a part of this creative juggernaut which is inspiring young minds across the country,” Ms Jaeger said.

This latest stage adaptation sees Griffith and Denton set off on a crazy adventure to tackle a world of startling obstacles including a hungry caterpillar, an angry vegetable kingdom and a 100 year ninja-snail epic voyage.

Local director driven by the struggles of returned soldiers