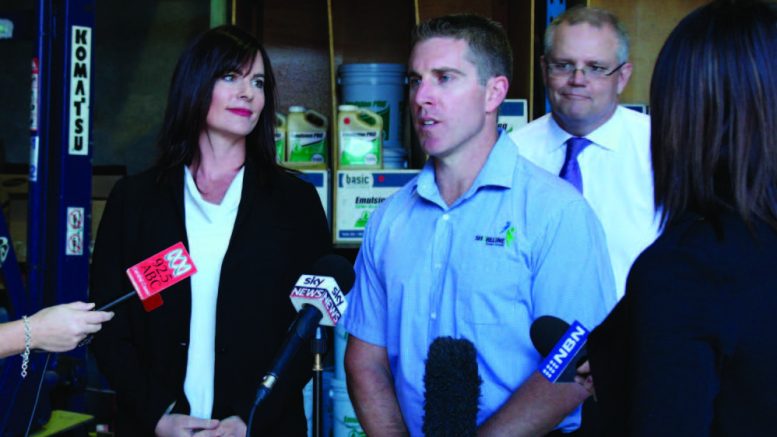 Job creation was the most important issue for Central Coast residents in the 2016 federal election, according to treasurer Mr Scott Morrison and member for Robertson Ms Lucy Wicks.

Both explained their party’s plans to create over 1,400 jobs in Gosford over the next few years. Mr Morrison and Ms Wicks were interviewed on Friday, May 20 during a visit to the owners of local business Shoreline Floors, Mr Troy and Ms Kylie Marquart. “Everywhere I go on the Central Coast, in my electorate of Robertson, the number one issue I hear from people living in the best region in the best country in the world is the need for more local jobs,” Ms Wicks said. “I am proud to be part of a Turnbull Government that is determined to deliver 600 new jobs into Gosford as we announced towards the end of last year,” she said, referring to the 600 positions that would be accommodated in the Australian Taxation Offi ce building on part of the former Gosford Public School land.

“A doubling of our commitment in the 2013 election, 600 new jobs that will be coming into Gosford … by the end of next year,” she said. “Yesterday [Thursday, May 19], we announced a $32.5 million commitment as part of a $72 million plan for a Central Coast medical school and medical research institute; a strong partnership with the University of Newcastle and the Central Coast Area Health Service and of course our local council. “That will see nearly 800 jobs directly created as a result of this investment.” Mr Morrison said the announcement of plans for a new medical school in Gosford was: “a key part of our innovation and science plan which is part of our national economic plan, investing in the educational facilities, the training facilities, the research facilities right here on the Central Coast, and that is how the Central Coast is benefiting from this National Economic Plan with our tremendous announcement yesterday of the $32.5 million that Lucy has worked incredibly hard for,” he said.

Mr Morrison concluded the interview stating that everything is on track for the Australian Taxation Office for Gosford.