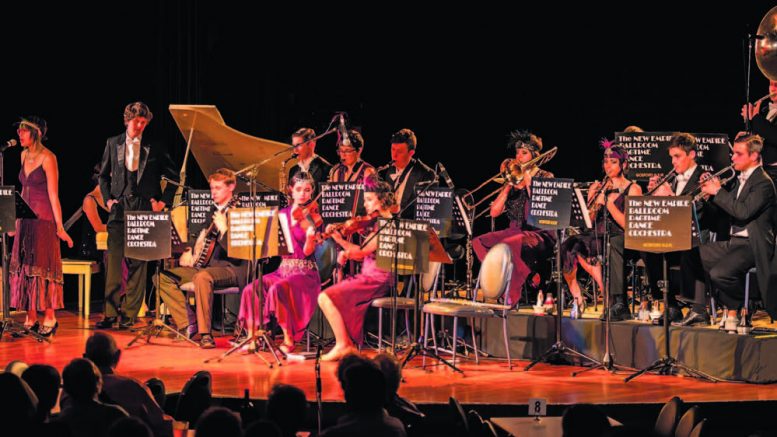 The orchestra during a recent performance

The orchestra has been wowing audiences at seniors’ week concerts, jazz and music festivals and appearances at Everglades Country Club. It has performed for The National Trust of NSW’s Miss Fisher’s Dinner Dance at Old Parliament House in Parramatta and at the Toast the Coast food and wine fair. The Laycock Street Theatre show will be an afternoon of music featuring ragtime and hot jazz spanning the years 1907 through to 1933. Early ragtime hits like Russian Rag, Red Wing, and Shake it and Break it, will be part of the repertoire along with hot dance tunes like The Charleston, The Black Bottom and ballads by such great composers as Irving Berlin and Jerome Kern.

The Orchestra, along with special guest vocalists Darryl Davis and Sally Loughoum, as well as exciting young dancers Callum Bright and Kate Doyle will take you on a trip down memory lane to when Saturday night meant going to your local dance where you would have heard an orchestra just like The New Empire. The concert is being presented by The Rotary Club of Gosford, who along with the Orchestra will be offering two scholarships to study Musicianship to two young, promising musicians at the Central Coast Conservatorium of Music. The orchestra’s Laycock Street Theatre concerts are always very popular: the last three sold out.

Established in 2010, The New Empire Ballroom Ragtime Dance Orchestra is an award-winning, authentic recreation of the original Ragtime and Hot Jazz Orchestras of the 1900s 1920s and early 1930s. “This ain’t no museum piece played by fuddyduddies trying to preserve their history”, band leader barney Waters said. “This is an orchestra full of young people: vibrant, alert, cheeky and sexy.”

Coasties encouraged to apply but not eligible