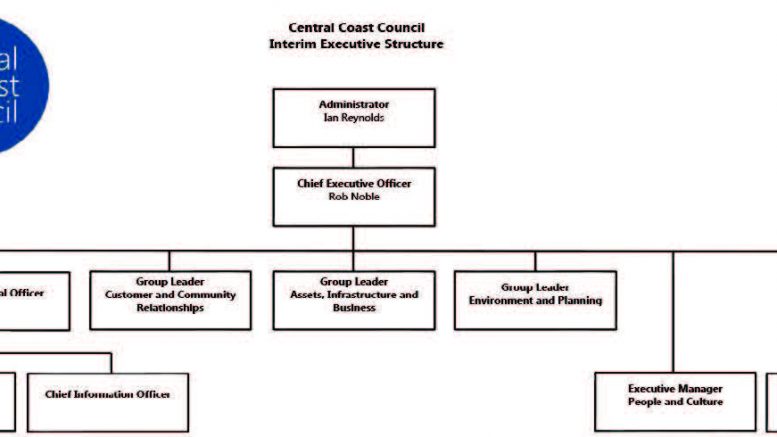 The interim executive structure adopted by the Central Coast Council at its first public meeting on May 25 did not include the interim deputy general manager’s role that was initially allocated to former Gosford Council CEO, Mr Paul Anderson.

“Not only is there no deputy general manager in the new structure, but no position in the new structure is exactly the same as any of the existing positions,” Central Coast Council CEO, Mr Rob Noble said. Mr Noble and administrator, Mr Ian Reynolds, said Mr Paul Anderson would have to apply for a lesser position within the Central Coast Council’s new executive structure if he wished to continue to work for the organisation. Mr Anderson has been on leave and uncontactable since the NSW Government proclamation on May 12 which dismissed the former Gosford Council and Wyong Council and established the new Central Coast Council.

“Paul is a highly intelligent and very competent senior executive,” Mr Noble said. “He was interested in the interim general manager’s position so you would have to imagine he is disappointed and upset,” he said. The interim executive structure adopted by Mr Reynolds includes Mr Rob Noble, whose title changed from interim general manager to chief executive officer. Six new executive positions then report directly to the CEO. They are: chief fi nancial officer (CFO); group leader of customer and community relationships; group leader of assets, infrastructure and business; group leader of environment and planning. An executive manager of people and culture and an executive manager of governance also report to Mr Noble, although they are a line down the hierarchy from the new CFO and group leader positions. An executive manager of transition and business performance and a chief information officer then report to the new CFO. Those eight positions replace the 12 executive positions spread across the two former councils. “The top end will be appointed by June 17 through an internal recruitment process,” Mr Noble said. “Potential aspirants [directors from the former Gosford and Wyong Councils] will be competing if they wish, or participating in the conversation to help determine the best fit,” he said. “We will propagate that from inside the organisation initially, and then underneath that once we have identified subsidiary structures and there will be other people competing for those roles.” Administrator, Mr Ian Reynolds said: “If you look at the structure I adopted last night, the chief financial officer is at the top because financial operation is critical. “The other people are group leaders and the idea is in that position you have a leadership role. “Then in due course, we will work through the rest of the structure.”

The group leader role is a departure from the traditional local government title of ‘director’ and is part of the Noble and Reynolds strategy to have a customer-focused culture within the Central Coast Council. “There is a process and of necessity we must, and want to, consult with staff about which functions will be reporting up to those senior people and there will be a recruitment process associated with that,” Mr Noble said. Of the existing senior executive positions from Gosford and Wyong Councils, only one of those officers has their tenure contractually protected, he said. “So those other people will either choose to compete for a slightly lower position or negotiate their departure,” Mr Noble said. At its fi rst meeting, the Central Coast Council resolved to engage the services of Winton Consulting to assist in the harmonisation of the salary systems of the former Wyong Council and Gosford Council. Winton Consulting was appointed without council undertaking a tender process. CEO of the Central Coast Council, Mr Rob Noble said: “Due to …extenuating circumstances, a satisfactory result would not be achieved by inviting tenders for these services.” The anticipated cost of the engagement is $216,605 inclusive of GST.

Harris backs calls for an inquiry into Council