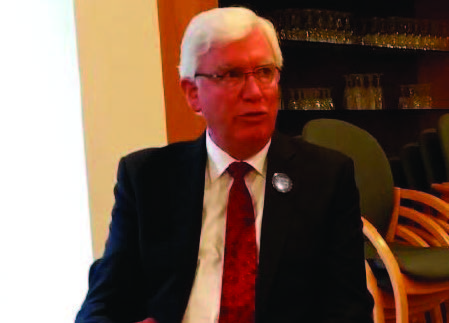 The administrator of the newly-formed Central Coast Council, Mr Ian Reynolds, said he was “really pleased” with the reception he was given at the council’s first public meeting on Wednesday, May 25.

Mr Reynolds, who came out of semi-retirement to take on the administrator’s role said: “I would not miss this opportunity for quids. “I got a good feel from the crowd,” Mr Reynolds said, adding that he had not been surprised to see a packed public gallery at the Wyong council chamber for the meeting. “If it was not full I would have been sad,” he said. “From my point of view, as the administrator, I want to be as open as possible. “I am new to the region, obviously, I come from Sydney, but I want to be known as a person and not a bureaucrat,” he said. Mr Reynolds suspended standing orders to provide the public present with some background about the new council. “I am humbled to be here and it is great to see so many of you here to witness this historic event,” Mr Reynolds said. “I would like to acknowledge and give sincere thanks to all former councillors, they have left a valuable legacy and they should be proud of the role they were playing in building the new Central Coast Council.”

Mr Reynolds said the new Central Coast Council was bigger than Blacktown City Council (formerly the biggest in NSW), spanned 1,700 square kilometres and had a huge asset base because it is also a water and sewer authority. “It is an exciting challenge to lead the biggest council in NSW; by 2031 the region will be home to 400,000 people, and the challenge is to provide those people with jobs, housing and lifestyle opportunities.” Coast Community News asked Mr Reynolds to describe the two former organisations he had inherited as a result of the merger of the former Gosford Council and Wyong Council. “In detail, I don’t know what I have inherited,” he said, adding that he had a greater understanding of the “northern end” of the new local government area [former Wyong shire] because the Central Coast Council’s new CEO, Mr Rob Noble had been acting CEO of Wyong Council. “He and I need to get across the southern end [former Gosford LGA],” Mr Reynolds said. Both Mr Reynolds and Mr Noble said they had already spent three days visiting depots, meeting the Central Coast Council’s combined staff of around 1,500. “They are the face of the council and we got a good reception,” Mr Reynolds said. “They are all on board with the merged council,” he said. As for the type of organisation he would like to hand over to the first elected Central Coast Council in September 2017, Mr Reynolds said: “At the end of the time, what I would like to lead is a strong organisation. “We are a community service organisation, but now we are actually one of the biggest businesses in Australia,” Mr Reynolds said. “In essence, you can’t do anything without money,” he said, confirming that he had asked Mr Noble to provide a detailed report on the new council’s financial position by the end of July. Once the council’s financial position has been confirmed, the next step will be to harmonise the two “widely different” former local councils into one. Mr Noble said the two former organisations were “dramatically different. “Internal relationships are fundamental to achieving an organisational culture that can serve the needs of a growing community,” Mr Noble said, explaining that he and Mr Reynolds wanted customer service to be the new council’s focus. “People will see a difference,” he said. “I can’t snap my fingers and say ‘right I want a customer-focused culture now’ but it is already happening and I want to lift it up a cog,” he said.

Mr Noble and Mr Reynolds both said they wanted to get rid of the “silos” that existed between the various business segments of the old councils that could have contributed to an “isolationist” approach. An early step towards breaking down old barriers has been to offer all staff the opportunity to apply for a job in the alternate geographical area. Mr Noble said about 25 per cent of the new council’s staff either lived in Wyong and worked in the old Gosford LGA or vice versa. They will now be given the opportunity to express interest in transferring to a role closer to where they live and this will mix up employees from the two former LGAs. “We have had a fabulous transition team working on the merger since November, so we are way ahead of other merged councils, some of whom have gone into a loveless marriage or a shotgun wedding,” Mr Noble said. “I don’t know if you could call ours a loving marriage but it has been cooperative.” He said the challenges included the two former councils having “completely different” systems for financial management, IT, salaries, organisational development, payroll, processing DAs, building applications and regulatory functions. “All these things are gradually being looked at with a view to ultimately having a cooperative approach,” he said.