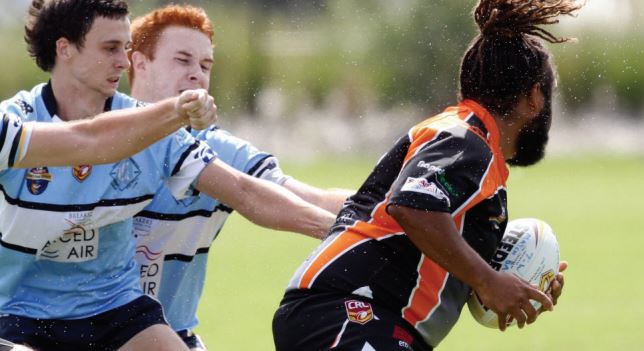 Gosford’s re-entry into the ranks of senior rugby league has generated excitement among local footy fans however, the opening round of the 2016 Open grade competition saw the Storm run into a clinical Tigers outfit at Duffys Road Oval, Terrigal.

Well rested spectators sporting purple and gold, flocked to the post daylight savings Sunday game to cheer on the Gosford Kariong men and yet The Entrance Tigers were having none of the hoopla; spoiling the party with a red hot display. After an even opening few minutes, the orange team soon began to dominate possession for long periods and duly ran in a series of tries to claim the competition points.

Disappointed Storm coach, Mr Edward Johnson, conceded after the game that: “the result probably came as a bigger surprise to me than anybody. “There is a lot of work to do, fitness first, defence second, and continue to support each other and keep growing the positive atmosphere that we have created so far.”

Best player on the day for Gosford was undoubtedly their whole hearted skipper, Max Russell, who was rewarded for his efforts, receiving a point in the referees 3-2-1 post game awards. Simon Latimer and Ben Richards also toiled manfully in centre field, while Jordan Groom had some nice touches from five eighth.

The brightest piece of Gosford attacking play arrived in the shadows of halftime when bearded winger Josh King shot down the right touchline to gather a Kurt Burrell cross field kick before steamrolling a hapless defender and flinging the ball back inside to Scott Westwood, who went very close to scoring.

Despite an unflattering scoreboard, and injuries sustained by Kurt Burrell and starting dummy half Nathan Linsley, the Storm were back playing senior footy, which stamped the day as a resounding victory for Gosford rugby league.