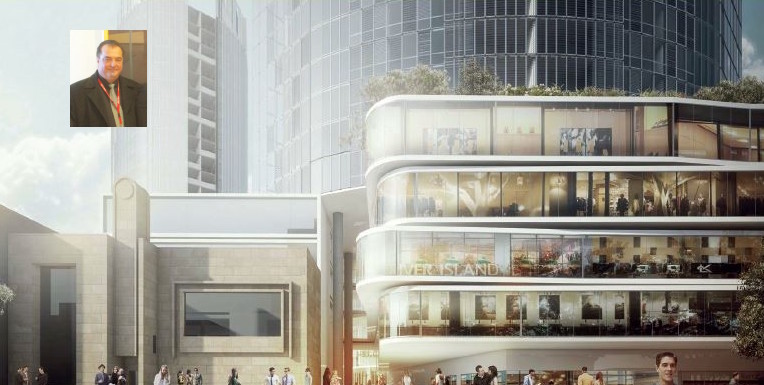 A regional performing arts centre integrated into the privately owned Waterside Development on the corner of Mann St and Georgiana Terrace is currently Gosford Council’s preferred location for the long sought after arts precinct.

The $180 million triple-tower Waterside development consists of three mixed-use towers with commercial, retail and residential space already incorporating a cinema complex and a new bus interchange. “Waterside at the moment has the inside running,” said Gosford’s deputy mayor Cr Craig Doyle when asked to nominate council’s preferred location for a regional performing arts centre in Gosford. “There have been others informally touted, but nothing formal,” Cr Doyle said.

“The general area from the water back to the council chambers through to the Waterside development is the area I think this particular type of facility should be built on,” he said. The member for Terrigal, Mr Adam Crouch said the NSW Government would not commit to its promised $12 million funding for a regional performing arts centre if it was to be built within or as part of a private development. “That is a matter for Mr Crouch,” Cr Doyle said. “State, federal and local government have always, over time, had facilities within privately-owned land and structures,” he said.

“Governments are constantly leasing in, and contributing to, public/private partnerships on the construction of different buildings, so once again Mr Crouch is showing a little bit of inexperience, unless that is what the current State Government is saying, and then, that would be a shame. “This is not, and shouldn’t be, a war. “Regardless of who has been in the government, council has always had a reasonable relationship with the state. “I got my name as the road warrior for taking roads ministers to task over the state of the Central Coast’s roads and we achieved action on that.

“At the moment there is only one government member on the Central Coast and at the moment it seems like we are getting a bit of an indifferent serve from the NSW Government resulting from the community voting that way,” he said. Cr Doyle said the development of a regional performing arts centre was a long-term investment that needed to be in the right location. “We all need to work together to achieve the right building on the right location. “

We have four Liberals on Gosford Council and that is the largest group by far, so I can’t understand why there has not been more cooperation with the state. “We want to work cooperatively with authorities, not against them. ”I don’t think anybody would be prepared to say Gosford Council has not worked tirelessly for the last 10 years to turn the ship around and work with developers to maintain their properties and develop them to make Gosford the capital city that it deserves to be.

“I don’t think we have said no to any site for the performing arts centre, however, there are some general community concerns about Poppy Park because it is such a lovely park and does hold a signifi cant place in the community’s heart. “I don’t believe that, as a council, we have said yes or no to any site. “We are currently investigating the feasibility of the Waterside site but that doesn’t mean it is a definite,” he said.