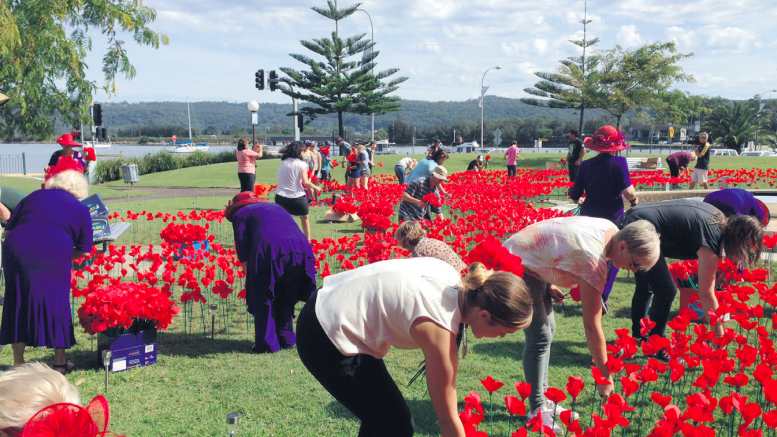 The 2015 Poppy Project in Gosford

The Gosford City Poppy Project is happening again and this year poppies will be popping up at Terrigal Skillion.

Installation of the Terrigal Poppy Project 2016 will take place at the Skillion, Terrigal on Thursday, April 14, and will remain in place until Friday, April 29. Gosford Council’s director community growth, Ms Judy Jaeger said that the Terrigal poppy installation is seeking to build on the level of community involvement and goodwill demonstrated at the inaugural Poppy Project.

Ms Jaeger said: “Commemorating the 100 year anniversary of the First World War, the popular public art project sparked widespread interest and recognition last year when a sea of red poppies, handmade by community members and groups, went on display in Rotary Park adjacent to Gosford City’s waterfront. “This project brought together people from a variety of backgrounds, interests and walks of life for a shared purpose to create the area now fondly known as Poppy Park.

“We hope to replicate that sense of goodwill and community spirit in this year’s poppy installation at Terrigal.” The 2016 Poppy Project coincides with ANZAC Day and is the brainchild of local historian, Ms Merril Jackson. Ms Jackson said: “This year marks 100 years since Australian First World War personnel disembarked to join the Western Front campaign, with the impact of war and losses of young men from our region during 1916, severe.

“The Terrigal Poppy Project will once again symbolically represent our community unity and compassion for the sacrifices made by so many in service to our nation.” Individuals, schools and local organisations are encouraged to take part by collecting a free poppy making kit from any Gosford City Library branch. All completed poppies should be returned to any Gosford Library branch by no later than 5:00pm on Friday, April 8. This year, knitted, crocheted and pottery poppies are also welcome. Poppy Project: ‘Never Forgetting the Sacrifices, Terrigal 2016’ is supported by Gosford Council and the Brisbane Water Historical Society.

Major changes to your newspaper