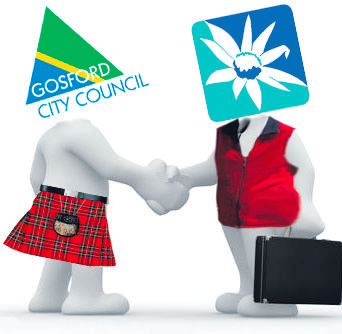 Gosford City’s 15 elected councillors have until April 15 to express interest in taking up an interim role on a proposed new Central Coast Council.

Gosford mayor, Cr Lawrie McKinna said he could confirm he had received an email last week from the NSW local government minister which he passed on to all councillors. The email called for expressions of interest in performing four interim roles on a new, amalgamated council. Selection of currently serving councillors for the possible roles identified will be at the discretion of the minister for local government or the newly formed council (in relation to two of the roles). The minister, Mr Paul Toole had written to Cr McKinna earlier in March to inform him that the delegate appointed to consider a proposed merger between Gosford and Wyong Councils, Mr John Rayner, would prepare a report for the minister and the Local Government Boundaries Commission for review and comment.

The minister will then consider the delegate’s report and the comments of the Boundaries Commission, and then make a recommendation to the NSW Governor in relation to the dissolution of the existing Gosford and Wyong Councils and the creation of a new local government area covering the whole Central Coast. A proposal from Lake Macquarie Council to incorporate some of Wyong’s northern suburbs is also to be considered by the minister and the Boundaries Commission.

Pending any recommendation for Gosford and Wyong Councils to be dissolved and a new local government area created, existing councillors must now express interest in an interim role on the proposed new council. Councillors have been sent a pro-forma expression of interest form that includes four “desired roles” described as “general examples of the types of roles that may be available to give currently serving councillors an opportunity to shape the future of any new councils”. The four “example” roles included: administrator, councillor on new council; member of local representation committee; or member of implementation advisory group. According to the expression of interest document, under the Local Government Act, the minister can appoint one or more administrators to exercise the functions of the mayor and councillors of a newly formed council until elections can be held for the new council.

The document did not state how many administrator positions might be available on the proposed new Central Coast Council. The expression of interest document also said: “Under the Act, the minister can retain some or all of the councillors of any former local government areas as councillors of any newly formed council until elections can be held. “The newly-formed council (led by an administrator/s or retained councillors) may wish to establish an advisory Local Representation Committee for each of the former local government areas, made up of representatives from those areas, to ensure effective local representation ahead of the next election.”

Finally, the newly-formed council may also wish to establish an Implementation Advisory Group “to advise on key decisions necessary in establishing and operating the new council”, and potential membership of that group is the fourth position existing councillors can express interest in. The criteria that existing, elected councillors must meet to be considered for any available interim positions included: commitment to making the new council a success; willingness to make decisions in the best long term interest of the broader community; commitment to working collaboratively with government in implementation; desire to represent the views of the community; commitment to promote the new council to the community; and availability to serve the new council until the next election.

Councillors wishing to express interest in serving in any of the outlined roles were then given space to write a 500-word supporting statement. Gosford mayor, Cr Lawrie McKinna said he had already submitted his expression of interest in performing the role of administrator on a new council. “I have put in for one of the administrator roles, but that is not going to be the major administrator,” Cr McKinna said. He said he expected an external administrator would also be appointed, along with an interim chief executive offi cer, to run the newly-formed council, expected to be one of the largest local government areas in NSW.

Cr McKinna said he had not been told how many positions would be available on a proposed new council or the timeframe for the likely merger. Independent councillor and deputy mayor, Cr Craig Doyle said: “I guess all of us are a little confused about why we are having to reapply for our positions when we were duly elected.” Cr Doyle said the chief executive offi cer of Gosford Council, Mr Paul Anderson and acting CEO of Wyong Council, Mr Rob Noble had received similar letters advising they needed to express interest in an interim position on a merged council. “I don’t know what I am applying for, there being no job descriptions and we haven’t even discussed it yet as a council,” Cr Doyle said. “It is my understanding that Doug [Eaton, mayor of Wyong Council] and Lawrie [McKinna] are applying for the administrator’s role that would replace the role of mayor, it is different to a financial administrator,” he said. “From what I am told, there could be one administrator or there could be more than one. “Both the mayors could be reappointed and there could also be an independent administrator. “I don’t know because I don’t think anybody knows.” Cr Doyle said he did want to be part of the formulation of a new Central Coast Council but understood the community could feel disenfranchised by the minister’s call for expressions of interest. “I can only extend my apologies to the community. “It is certainly not how I would think we would conduct local government, but at the end of the day, the minister knows what he wants. “Once the decision is made, hopefully we can move forward and get some speed up. “I am baffled by having to reapply and I know the other councillors feel the same. “You could have 19 people applying for administrators’ roles. “I have to sit down with the very little paperwork that we have and decide what role to apply for,” Cr Doyle said. Cr Bob Ward said he also intended to apply for each of the three roles listed apart from the role of administrator.

“I will probably express interest in three of the four categories because I think I have got something to offer in three of them, and I expect the majority of our councillors will respond in the same way, because they want to make a success of the new council,” Cr Ward said. Greens Cr Hillary Morris said: “I’ve thought about it and whilst I think it is totally unreasonable that we have to fi ll in this form, if I don’t fill in this form, how do I continue to represent the people who elected me on the new council? “I want to ensure we get the best possible outcome, and for me, the best possible outcome is being able to participate in any decision making, bearing in mind I am someone who cares passionately about the environment and social justice.

“The process, right from the start, has been undemocratic; it has been driven clearly as a political decision, I don’t understand why, but it has. “There has been no proper community consultation and certainly the people I talk to are completely opposed to an amalgamation, and now as councillors, we are being asked to fi ll in an expression of interest, even though we have been elected to our roles for the community.” Cr Jeff Strickson said he was in the process of fi lling out his 500-word EOI when Coast Community News called him for comment. He said he believed he was qualifi ed for and suited to perform the roles.

“Since I have been voted in as a councillor, I have seen my role as that of a mediator between rate payers and council and I work as hard as I can to ensure the best outcomes for the people and the LGA itself. “It is a role that I have taken great pride in for the past seven years and I would like to continue to do so,” he said. Cr Deanna Bocking said she would be applying to continue in her present role as a councillor. “I think it would be good to have councillors from the previous councils transitioning on to the new council,” she said. Labor councillor and former deputy mayor of Gosford, Cr Jim McFadyen has refused to express interest in taking an interim role on a proposed new Central Coast Council. “First off, I won’t be sitting as one of these administrators,” Cr McFadyen said. “I was elected as a council representative by the community,” he said. “We’ve got people working in the council as directors, so I can’t imagine anyone being above those people.”

Cr McFadyen said he had been advised by Local Government NSW not to express interest in any of the interim roles. “We have been advised by the association that we should not apply for these jobs. “We have been elected by the community so we shouldn’t be doing these jobs. “I will take advice from the Labor Party in any case.” Cr McFadyen was elected to Gosford Council in 2004 and said he had hoped the local government election would have been held in September 2016“ and I would have bowed out gracefully. “I think it is all political in any case,” he said. Cr McFadyen said he questioned how any of the current councillors sitting on either Gosford or Wyong Council could be deemed qualifi ed to fill the position of administrator during the time between the formation of any new local government area and the next election. “If you do the ring around, most of the Liberals will apply for administrators’ jobs but what qualifications have they got to be an administrator?” he said.

Fellow Labor Cr Vicki Scott did not respond to calls from Coast Community News asking her to comment on her intention to express interest in an interim role on the proposed council. Cr Chris Burke and Cr Gabby Bowles also didn’t return calls asking for comment.