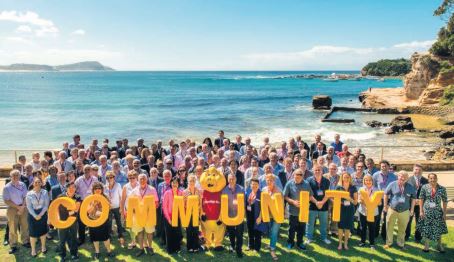 Community Banks donated $2,107 to the Iris Foundation for its work on youth suicide prevention

The NSW and ACT Community Bank network has made a $2,107 donation to the Iris Foundation to help its youth suicide prevention work.

The donation was made on Friday, April 1 at the Crowne Plaza Terrigal where 160 delegates had gathered for the NSW/ACT Community Bank State Conference. Co-founders of the Iris Foundation, Ms Dawn Hooper and Ms Bev Baldwin were invited to the conference to share the work the organisation has been doing in the community since it began more than 10 years ago.

“This donation is just wonderful and we are so thankful for the support of all the Community Bank branches,” Ms Hooper said. “This money means we’ll be able to do a new program, Cool Connection in Schools, which works with children aged eight to 12, talking about mental health issues like depression and anxiety.”

Ms Hooper said an art therapist and youth worker would start working with two local schools as part of the six-week program. “This new initiative, like all our work, is entirely reliant on donations and the fundraising we do, so to be able to have the community’s support is essential,” she said.

Community Bank branches across the Central Coast, and others throughout NSW and ACT, give back a large portion of their profits to the community through sponsorships, grants and donations like this one. Local Community Bank companies have now returned more than $1.2 million to the Central Coast community, these are profits from local banking business at branches in East Gosford, Lisarow and Kincumber.

These achievements were celebrated at the conference.