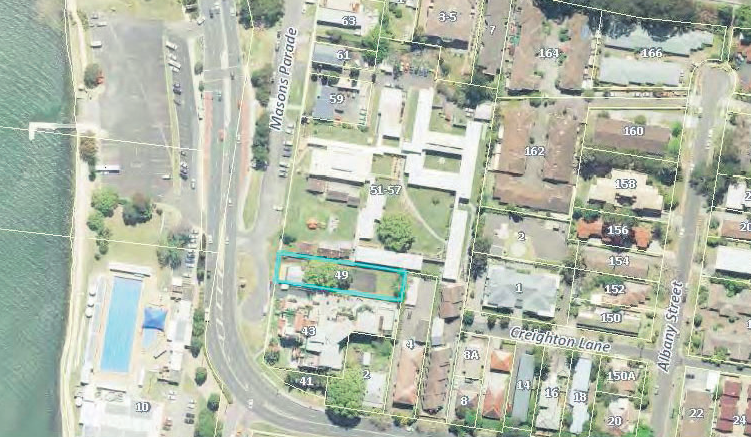 The site of the refused residential development on Masons Pde

A $9 million residential development in Point Frederick has been refused by Gosford Council. The proposal included two separate residential flat buildings up to six storeys and comprising 23 units on Masons Pde.

Assessment of the application determined that it did not comply with a number of local planning controls, particularly relating to side setbacks and separation from adjoining development and would have had adverse overshadowing impacts on nearby properties.

Gosford mayor, Cr Lawrie McKinna informed community members who attended the ordinary meeting on March 8 that the DA had been refused and would not be discussed at the meeting. The site is on the eastern side of Masons Pde, Point Frederick, and contains an unused Chinese restaurant building. The site has an area of 1,012 square metres and street frontage of 14.986m to Donnison St. There is a large camphor laurel tree on the site which would be removed as part of the development. The site is highly visible from the Central Coast Hwy and has direct views to the west to Brisbane Water close to Gosford Swimming Pool.

The submitted proposal was originally for two separate six storey flat buildings containing 27 units, located over common basement parking. Following issues raised in public submissions, the applicant submitted an amended plan which reduced the height of the building in part, and reduced overall unit numbers to 23. The revised proposal complied with the LEP Floor Space Ratio (FSR), however does not comply with a number of other planning controls including LEP building height (in part), the LEP Design Excellence requirements, side setbacks and site coverage under DCP 2013 and SEPP 65 in relation to building separation and overshadowing impacts on the neighbouring development. “The proposal would result in adverse shadow impacts on the adjoining unit development to the south; adverse amenity impacts on surrounding properties and due to a poor quality design, is out of keeping with the streetscape and future development in this highly visible location adjacent to the Central Coast Hwy,” a staff report to the council meeting advised.

Thirty three public submissions were received raising concern with overshadowing, amenity impacts, non-compliance with planning controls and other issues. Council has, on a number of occasions, requested amended plans that address and minimise the impacts on adjoining properties, however to date the various amendments suggested have not signifi cantly reduced the impacts on the adjoining Araluen Apartments to the south or provided a design considered to provide a high quality outcome for the site context. “All relevant matters under Section 79C of the Environmental Planning and Assessment Act, section 89 of the Local Government Act, the objectives of the zone and the principles of ecologically sustainable development have been considered and the proposal is recommended for refusal,” the staff report said.