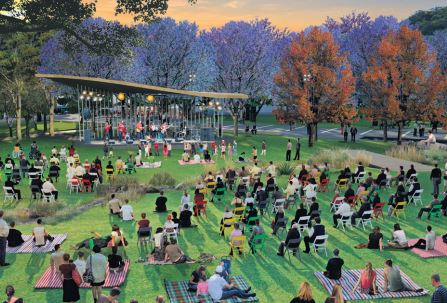 Kibble Park may receive a facelift from the Lederer Group Gosford Council has achieved what many thought was impossible, attracting over $1 billion worth of potential development to Gosford’s city centre.

According to Gosford mayor, Cr Lawrie McKinna, since mid-2014, council has received $1.01 billion worth of development applications for the city centre alone. Around $740 million worth of these applications has now been approved by Gosford Council and the Hunter and Central Coast Joint Regional Planning Panel, and currently about $270 million in applications is still being assessed.

This does not include the recent Lederer Group announcement for Kibbleplex and the Imperial Centre. “To crack the magic $1 billion mark for development applications in Gosford’s city centre is well beyond the wildest expectations of many people,” Mr McKinna said.

“I doubt this amount of investor confidence in such a short period has ever been seen anywhere on the Central Coast. “I’m more confident than ever that Gosford is on the cusp of a generational change that will see it established as the Coast’s capital.

“This is all due to the hard work of my fellow councillors, our CEO and his staff, and Gosford City’s passionate community, to highlight what our prime, waterfront city has to offer. “What we need now to seal this legacy is to see more and more cranes in the skies over Gosford, just like the first ones that went up in October last year,” he said.

Council’s CEO, Mr Paul Anderson said that even more development applications were expected to roll through the door very shortly. “We’re expecting to see another huge influx of applications over the next month, with our extension on floor space and height bonuses for eligible city centre development set to wrap up at the start of April,” Mr Anderson said.

“It’s no secret that our planning has revolved around attracting development that will bring more people back into the heart of our city to live, work, shop and be entertained. “To attract over $1 billion worth of possible residential, commercial, retail and other development in less than two years has taken not only hard work, but also plenty of innovation by council.

“We’ve lead the way with our bonus incentives and other major commitments like our announcement last week of the concept plan for a brand new, eight level public library and community hub in Mann St. Mr Anderson also said this wasn’t just a pipe dream for Gosford.