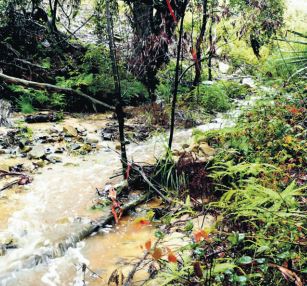 [Audio available] The Mangrove Districts Association has disputed claims made by the NSW Environment Protection Agency (EPA) that its second round of water quality testing results from Ourimbah Catchment showed the area to be in good health.

“In the case of the landfill discharge, the sampling of the creek was late September, two months after the outflow had stopped, and in the wrong creek system: amazing that they didn’t find anything of concern,” said Mountain Districts Association spokesperson, Mr Stephen Goodwin.

“At the discharge site, sampling was perfunctory, and the creek and sediment below the channel were not sampled,” Mr Goodwin said. “Results of vegetation and silt sampling the EPA did carry out on that occasion have not been released,” he said.

According to Mr Goodwin, the EPA neglected to mention that the vegetation and silt test results had not been made public when it released its second round of Ourimbah catchment results on February 12. “They were also asked to sample in the holding ponds within the landfill, which they reportedly did in November.

“Again, no results are forthcoming.” According to the NSW EPA, the authority commenced testing the catchment in September 2015 to address community concerns alleging that runoff from the Terra Verde landfill in Central Mangrove had entered the catchment.

Mr Steve Beaman, the NSW EPA’s executive director of waste and resource recovery, said the EPA has met with the Gosford community a number of times and is working with them to address their concerns about water quality in the catchment.

“Given residents’ concerns, we engaged the Office of Environment and Heritage’s (OEH) science team to test the catchment in September and November 2015, with the community guiding us to the places where they had concerns. “The sampling consisted of chemical analysis for a broad range of metals, pollutants and macroinvertebrates, which are small insects or worms that live in fresh water.

“The first round of test results showed levels for these metals and pollutants to be below Australian guidelines for fresh and marine water quality. “Tests for macroinvertebrates , showed there was high diversity, including those that are sensitive to pollution, which is a strong indicator of good creek health.

“These results of the second round of testing released today also show the creeks to be in good health and not impacted by the landfill,” Mr Beaman said. He said the EPA would continue to conduct regular inspections of the Ourimbah Catchment and was scheduled to meet with members of the community to discuss the second round of test results and devise an ongoing water sampling plan.

Mr Goodwin from the Mountains District Association questioned the EPA’s description of the run-off from the Verde landfill as ‘alleged’ and that the authority took claims of ‘environmental impacts’ very seriously. “The choice of the words ‘alleged run-off’ doesn’t fit with the fact that the EPA itself was quoted as admitting that sedimentladen water had left the dump site, after initially claiming that it hadn’t,” Mr Goodwin said.

“It took a diligent Wyong Council catchment management officer to follow the pollutant trail back along Hallards Creek, track the source back to the landfill, and ask the EPA officers to accompany him back to the discharge point under the landfill fence to see for themselves,” he said.

“Photos taken by the catchment management officer have not been released. “Mountains District Association members were able to do the same thing and have their own photos to prove it. “It doesn’t take too many powers of deduction to see that sediment-laden water was pumped under the landfill fence in the North Western corner and across a path into Ourimbah State Forest, probably over an extended period.

“There is a band of long-dead vegetation below the outflow and a well-established channel leading through brush into a tributary of Hallards Creek, which flows into Ourimbah Creek and thence into the water supply. “You would think that this was a powerful trigger for a full investigation, particularly as the EPA itself said it was now being treated as a criminal matter.

“Isn’t the EPA supposed to gather evidence, not just ask the operator if he was a naughty boy and take his assurances that he was not? “How is it possible that it took substantial community pressure and publicity for the EPA to do any sampling? “Remember how diligently they went after Katandra Poultry Farm at Peats Ridge?

“The choice of the words ‘environmental impacts’ in the press release is also telling, because that is harder to show and to prove than environmental pollution. “It may necessitate a properly conducted investigation, which despite the EPA making soothing noises, has yet to occur in the case of Mangrove Mountain landfill and its manifest licence breaches.

“There seems little point in meeting with EPA representatives when they continue to obfuscate. “We stand by the need for a Commission of Inquiry to shake the complacency and duplicity long evident in the EPA, and to reveal the truth about the activities at Mangrove Mountain Landfill and the threat it poses to the Central Coast water supply,” Mr Goodwin said.

Mr Goodwin said the NSW premier, Mr Mike Baird had responded to the association’s request for a Commission of Inquiry by referring the matter to the NSW minister for the environment, Mr Mike Speakman.