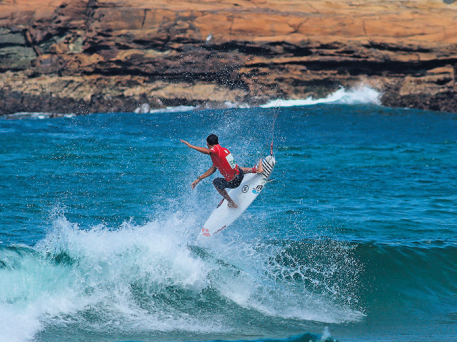 A senior competitor at Avoca on Tuesday, February 9

The Central Coast Pro WSL event will run from February 9 to 12, while the Junior Series Pro will be held on February 13-14. Nearly 200 competitors will surf in the qualifying series event, with a further 88 competing in the Pro Junior.

Surfing NSW CEO, Mr Mark Windon, said the NSW Pro Surf Series will give promising surfers the perfect platform to take their surfing to the next level once they finish their time on the Junior Qualifying Series (JQS).

“We anticipate the NSW Pro Surf Series will become the ideal stepping stone for surfers who aspire to compete in higher ranked events but may not necessarily have a high enough seed to gain entry, as well as some of the world’s best who want to fine-tune their act, prior to the WSL Championship Tour getting underway in March,” Mr Windon said.

The NSW Pro Surf Series was announced in August 2015 at Avoca, by Member for Terrigal, Mr Adam Crouch MP alongside current WSL Championship Tour surfers. Mr Crouch said: “The NSW Pro Surf Series is a fantastic initiative, and I can’t wait to see some of the world’s top surfers come to Avoca Beach in 2016 to compete.

“It will also provide a great boost to our local visitor economy, and show the world the beautiful beaches we have here on the Central Coast.”

WSL Australasia Tour Manager, Mr Will HaydenSmith said: “NSW is home to some of the best surf and surfers in the world and we’re excited about the prospect of young aspiring professional surfers getting the chance to surf against Championship Tour surfers and local legends in these events”.

The NSW Pro Surf Series was developed for Australian and International surfers to gain ranking points and prize money on the WSL Qualifying Series.

The Series also creates a NSW coastal road trip for all to explore the variety of waves, visit local communities and enjoy NSW surfing culture. Events begin at around 7am each day, and run through to at least 3.30pm.