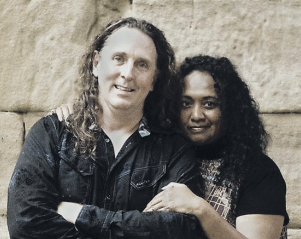 Original roots songsters , Phil and Trudy Edgeley, will feature in a pre-GosBlues event at Quattro Country Blues, at the Quattro Restaurant and Bar at Erina on Thursday, February 18.

They will be supported by house regulars, BluesAngels and High Steppin’ Muskrats. Musician and principal event organiser of Quattro, Tom Flood, said: “The Edgeleys, former residents of Ettalong Beach, took to the highways in 2009; Phil performing his original blues, wowing listeners with his extraordinary slide guitar skills, and Trudy managing the tough life of the blues road.

“They circumnavigated this country multiple times and toured the US and the UK to wide acclaim – releasing Phil’s third soloalbum, ‘In the Blood’. “In 2012, Trudy returned to performing, backing Phil on Cajun percussion and adding her rich vocals and strong song-writing, steeped in her Islander, Jamaican and Irish heritage, to Phil’s British/Delta folkblues mix to forge a unique blues and roots sound.

“Their live energy is caught remarkably on their album, ‘One Plus One Equals Three’. “With a new home-base in a tiny rural-village just outside of Bendigo, and a string of festivals in their wake, they are the most seasoned and celebrated performers to feature at Quattro Country Blues so far.

“The energy and soulful moodiness on stage is cut by a genuinely warm line of ironic and cheeky banter. “This is the Edgeley’s fi rst show on the Central Coast amongst old friends and colleagues in many years and you never know what might happen. “But you’ll surely kick yourself ever after if you miss it,” he said.