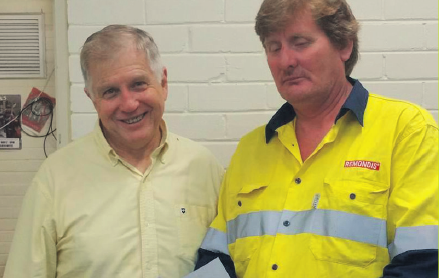 Gosford’s garbage truck operators have said they are thankful that the city’s mayor, Cr Lawrie McKinna has agreed to meet their representatives to discuss employment conditions they want included in the council’s next waste services tender.

Local truck operator and Transport Workers Union (TWU) representative, Mr Ian Hankinson said the 70 garbage truck operators had been asking for a meeting with Cr McKinna since August 2014 and were relieved that he had agreed to a meeting in the second week of February. The waste truck operators and their union, the TWU, want Gosford Council to insert clauses in their tender document to protect their rate of pay and the permanent and full-time nature of their jobs.

A delegation of 60 truck operators met on the footpath outside Gosford Council’s head office in Mann St, Gosford on January 18 and resolved unanimously to write an open letter to the community about their concerns. The drivers agreed to meet again outside the council building on January 27 if Cr McKinna didn’t agree to meet with them, but he has since agreed to a meeting. According to Mr Hankinson, other local councils, including Campbelltown, Canada Bay, Wollongong and Ryde, have included clauses in their tender documents to protect their waste collection workers’ pay rates and job security.

Mr Hankinson said local operators will urge Cr McKinna to insert a similar clause into Gosford Council’s tender document, which is due for a period of public consultation before the end of April. He said the type of clause the waste trust operators are looking for would state that the “contractor must, as a minimum requirement, preserve employee pay rates and pay-related conditions”. At the moment, tenders for Gosford Council’s waste services are granted on a competitive basis with price being a major determinant. “Remondis, as the current provider and employer of the operators, won’t even be able to tender at our current rates of pay because they will be undercut by at least $8 per hour because that is what other contractors will tender at,” Mr Hankinson said. “We could lose $8 an hour and have to reapply for our jobs if a new contractor comes in,” he said. “If we get this clause in the council’s tender document, we won’t have to go through this every seven years,” he said. He is also concerned about the city’s waste service employees becoming casualised.

“Casuals have the right to become permanent after a period of time but some operators get around that by using labour hire companies.” Mr Hankinson said the use of labour hire companies should be an issue for community concern because current employees are reliable, skilled and make safety a priority. Independent candidate for the federal electorate of Robertson, Mr Van Davy said he has offered his support to the waste truck operators. “Their claim is spectacularly moderate, even gentle,” Mr Davy said. “I have never seen a zero percentage claim for wages like these fellows have lodged.” In their open letter to the community, the operators wrote: “the drivers feel that, despite many years of loyal, safe and competent service to the community, their livelihood is now threatened by decreases in hourly pay rates and replacement of permanent and full time jobs with casual and part time jobs. “We truck operators are skillful and safe; we perform a job which protects the community from vile smells, crawling vermin, fl ies, disgusting aesthetics and the spread of diseases. “We have heard that an hourly rate of $22.50 is being considered and that permanent jobs will be replaced by casual jobs. “This, if correct, is an awful injustice to the truck operators and a living standards blow to our families – we too have children, home mortgages, bills and fees to pay.”