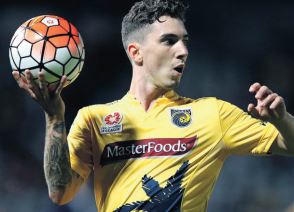 Mariners’ fans can expect the F3 derby against the Newcastle Jets at Gosford’s Central Coast Stadium on Sunday, February 28 to be as fierce as ever.

According to the home team’s captain, Nick Montgomery, Storm Roux’s fractured fibula and dislocated shoulder in the previous game against Melbourne City was “tough to take”, but the team had to put that, and their four to one loss against Melbourne City, behind them and step up for their next home game.

He urged his fellow team members and their fans to “look forward to what is going to be a massive derby against Newcastle on Sunday”. The Mariners’ captain acknowledged there would need to be some changes made to the team’s defensive lineup, “but there are boys who have been chomping at the bit to play.

“I know the team is going to fire on Sunday and we are going to go out and try and get a few points against a Jets side that is good at set pieces. “That is something we will work on this week, we know our strengths and we are looking forward to the game,” he said.

Montgomery, who said he had played in many derbies, commented that “form goes out the window” when it comes to two teams with a turf rivalry. “It is which 11 players turn up on the day… it is 11 v 11 and in the end, it is which 11 want it the most and are fi red up, that’s the team that ends up winning the game.

“So we are not looking too much at form. “We have been unfortunate in a lot of games, leading at half time and then, for whatever reason, we’ve come off second best in the second half and that is what we are trying to put right.

“Coming into this game on Sunday, we are not looking at anything else, we are just looking at giving our fans something to cheer about and giving it hard to Newcastle.” Montgomery urged Mariners’ fans to fi ll Gosford’s Central Coast Stadium for the 5:00pm kickoff.

“We need our support, our support has been brilliant all season. “Everyone knows it has been a tough season, it has been a sort of transition for the club. “We’ve got so many young lads and for them it is going to be an experience that some haven’t had before, but they will be going into this game fired up and full of confidence.”

He said the name of the freeway between the two teams may have changed but the Coast versus Newcastle F3 derby is as “fierce as ever”. “We’ve got seven games to go and we want to end this season strong and go straight into the next season with a plan,” he said.

Nick Montgomery acknowledged that Mariners’ fans hadn’t had much to cheer about during the 2015- 16 A-League Season but said he remained confident a win against the Newcastle Jets was achievable. “This three points could really be the catalyst pushing us on for the remainder of the season. “Home fans mean everything,” he said.

“A lot of the fans understand where the club is going and the transition it has been in and unfortunately that has its consequences and we’ve found ourselves short in a few areas. “The owner is trying to make the club sustainable for the future and that is exactly what he has been doing.

“We are looking forward to a good crowd on Sunday, a good win and pushing positively towards to end of the season and beyond. “If you can’t lift yourself as a player for this game, then you shouldn’t be a footballer.

“We will have 11 players that are fired up and it is a massive game and hopefully the supporters will come out in force and we can send them home happy,” he said.

Mariners’ international signings are out of quarantine

A Salute To The Anzacs by Coast Opera Australia