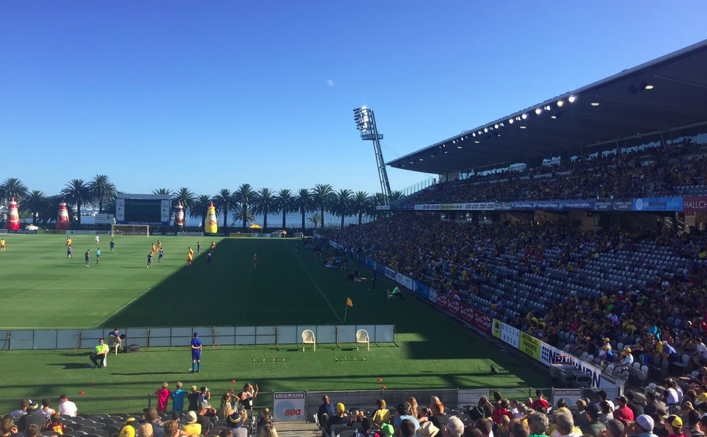 Great crowd of 7,500 witnessed a tough, yet disappointing F3 derby in Gosford.

Steven Ugarkovic scored the lone goal in this afternoon’s #F3Derby to seal all three points for the Newcastle Jets. #CCMFC will have the chance to hit back at home next week with Melbourne Victory set to visit Central Coast Stadium on Sunday.

A defensive lapse on the hour mark was enough to see Ugarkovic one-on-one with Paul Izzo who had no chance to stop the close range strike.

The Yellow & Navy came home strong to dominate field position and share of the chances in the second half but unfortunately for the home side there was no end product to deliver an equaliser.

Special mentions go to Liam Rose who put in another incredible performance in the middle of the park, Izzo who was sharp in between the sticks and Harry Ascroft who delivered a brave shift out of position at right back.

Walmsley will welcome the return of two key attacking weapons next weekend with Roy O’Donovan available for selection after his eight week hiatus along with Fabio Ferreira who’s one week on the sideline has been served. Also coming back into the squad is defender, Jacob Poscoliero.

57’ UGARKOVIC GOAL: January recruit Steven Ugarkovic provided the away team with the opener after a defensive mix up on the edge of the area. Free on goal, Ugarkovic made no mistake with the finish.

“It was a good effort from a very young team, we made a crucial mistake at the back that resulted in a goal,” Walmsley said.

“We finished the game really well, Luis Garcia getting injured at the start of the game changed the way we had to approach defensively. We kept Luis out there for as long as we could because even at half pace he continued to unlock the door.

“It’s only the third time we haven’t scored all season and I’m amazed that we didn’t today.

“The Jets set up early in the season to be a very resilient team and they’ve added to their capability in transition as the season’s gone on, Leonardo has got his legs and is starting to cause a few problems.

“Harry Ascroft played out of position at right back against Nordstrand and put in an incredible defensive performance and I think man of the match for us was Mickey Neill at left back.

“There will be a tipping point where the mistakes stop and that’s a 0-0 draw or a 1-0 win.

“I’m just sorry for the fans. They are turning up in numbers every week, their team, my team and our team are sitting bottom of the ladder, nobody likes it, me more than anyone.

“We have a recruitment strategy, we know where we need to strengthen the squad and when we add some experience to our spine we will be a different proposition come next season.”