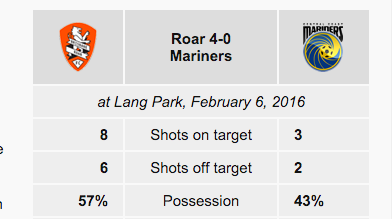 In what was a tough night at the office for the Yellow & Navy, the Mariners lost Mitch Austin in the warm up due to back spasms and Harry Ascroft saw red with 20 minutes remaining.

After two matches on the bounce away from home, the Mariners return to Central Coast Stadium next Sunday to face Adelaide United. All eyes will be on the team sheet for a match that Head Coach Tony Walmsley has earmarked as Luis Garcia’s potential starting debut.

20’ NORTH GOAL: It was an unlikely first goalscorer for Brisbane Roar in North. The veteran defender lurched forward for a set piece and headed home from close range.

36’ MACLAREN GOAL: After an accurate Dimi Petratos cross into the Mariners box, Maclaren pounced on the ball and fired off a shot. His volley from close range gave Paul Izzo no chance to make a save and doubled Brisbane’s lead.

59’ CORONA GOAL: Phenomenal technique from Corona put Brisbane Roar three goals in front. A pass from Thomas Broich to the Spaniard on the edge of the box allowed Corona to fire first time, his shot was placed perfectly in the bottom corner.

73’ HENRIQUE GOAL: After Ascroft brought Maclaren down in the box, the substitute was shown a red card and Brisbane was awarded a spot kick. Henrique stepped up to the mark and made no mistake with his finish.

“The biggest disappointment was how we defended, we started OK on the ball which was an indication that we were going to have a real crack but when you see the defence sitting four yards deeper than they were supposed to you’re taking a massive gamble,” Walmsley said.

“Ascroft’s intent was to win the ball, not to bring the player down. At 20 years old he’s one of our shining lights.

“I’m kicking myself today, my gut told me to play Harry Ascroft in the middle of the park to give us some legs but I second guessed myself and left him on the bench and we all saw how that ended up.

“It would have been unfair to him [to start Luis Garcia] we definitely think Adelaide at home next week is the best opportunity to give him a start.”