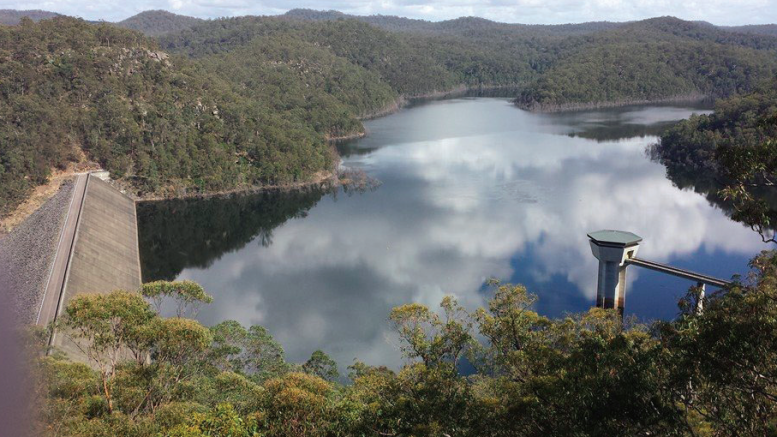 Mangrove Creek Dam at more than 74 per cent

Mangrove Creek Dam has reached its highest ever water level.

Water storage levels at Mangrove Creek Dam are now more than 74 per cent and total storage across the Central Coast’s dams has reached 75.6 per cent. Gosford mayor, Cr Lawrie McKinna, said the Central Coast community should be proud of the major role it has played in securing the region’s long-term water supply. “The Australian Government provided funding for part of the Mardi-Mangrove link, but our community picked up the tab for the shortfall and remained committed to water conservation while we were in the grip of a chronic drought,” he said.

“Along with many other system improvements, the boost that the link has delivered for our water supply has proved the decision to build the pipeline was well worth the investment. “We are now in a strong position to make sure the community’s current and future water supply needs can be met,” he said. Gosford Council’s director of construction and operations, Mr Stan Antczak, said the councils were being proactive in their future planning. “We are working with our regional partners, including the Department of Primary Industries and Hunter Water, to ensure our water supply remains secure.

“Any decision to upgrade Mangrove Creek Dam will need to consider broader, regional water resource planning activities across the Hunter and Central Coast. “It will take a further 10,000 million litres, the equivalent of Mardi Dam plus half of Mooney Mooney Dam, to raise total storage levels to 80 per cent but, in the meantime, we are well prepared for any future droughts.” Wyong deputy mayor, Cr Lynne Webster said this was an historic moment for the Central Coast. “In February 2007, we had grass growing around the base of the tower at Mangrove Creek Dam and less than 13 per cent in our dams,” Cr Webster said.

“Today, the brown line on that tower is gone and we are higher than we have ever been. “It shows the Mardi- Mangrove Link has proven its worth, transferring more than 22 per cent of the capacity of our largest dam in fi ve short years and drought proofi ng the Central Coast.” In the two weeks to January 20, the Mardi- Mangrove Link harvested 1,532 million litres, or more than 610 Olympic swimming pools of water, for the Central Coast’s future. Wyong Water director, Mr Greg McDonald said recent concerns over the dam levels were unfounded. “It’s no secret that we have a current operating limit of 80 per cent on Mangrove Creek Dam to ensure it is not damaged by an extreme flood.

“This is a common issue for many dams and is due to a new understanding of hydrology and new standards that did not exist when the dam was built,” he said. “Our most recent proposals to the NSW Independent Pricing and Regulatory Tribunal (IPART) to upgrade the dam included preconstruction activities and construction activities. “Both were rejected for the current IPART determination period, ending June 30, 2017. “We are currently reviewing our options, and until we are sure that spending our ratepayers money on the works required to increase the operating limit is the best option for our water supply system, we will continue to investigate,” he concluded.