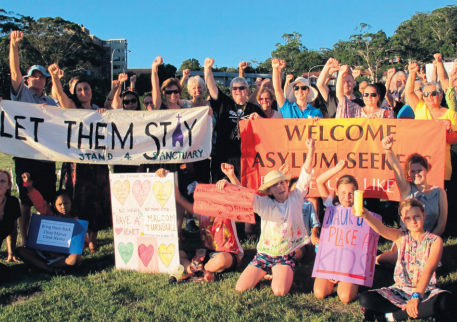 Central Coast for Social Justice held a peaceful gathering on the Gosford waterfront calling on the Federal Government not to return children to Nauru.

The gathering was held at 6:00pm on Monday, February 8 and was attended by local men, women and children. Those attending the gathering wanted to register their opposition to the High Court finding that offshore detention was legal.

They were also demonstrating against government plans to return children who were transferred from offshore detention centres to Australia to receive medical treatment. Days earlier, the Gosford Anglican Church in Mann St advertised that it would be willing to offer sanctuary to asylum seekers.

“We join with many churches throughout Australia, and the Australian Refugees Task Force, in offering Gosford Anglican Church as a place of sanctuary for asylum seekers,” Father Rod Bower said. “The ancient principle of sanctuary goes back to the Old Testament and was enshrined in English Common Law,” he said.

“Where a state is causing grievous harm, churches can provide sanctuary and immunity from arrest by authorities. “The legality of sanctuary has never been tested under Australian law, nevertheless we are determined to apply its moral precepts and protect the most vulnerable from certain harm.”

Community let down by former leaders

‘Welcome to our Community’ Day at Kibble Park