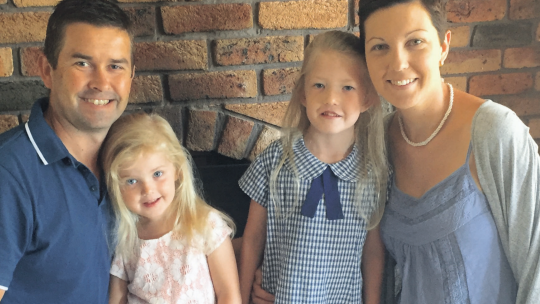 Chris and Amanda Harvey of Narara have had a very different reason for celebrating Valentine’s Day for the past six years.

Their daughter, Taylor, who will turn six in April and has just started kindergarten at Chertsey Public School, is a Heart Kid and proud of it. Taylor was born with a large hole in her heart and an incomplete Aorta.

Within 36 hours of her birth, she had been transferred via ambulance from Gosford Private Hospital to the neonatal intensive care ward at Westmead Children’s Hospital and had her first open heart surgery. Taylor is also hearing impaired and was born with a cleft pallet, so her first 18 months were difficult, to say the least.

Mr Harvey said he and wife Amanda did not know about Taylor’s heart in utero and the first few weeks of her life were “surreal”. The first sign that something was not right was a clicking noise in Taylor’s throat when Amanda tried to breast feed.

“The midwife said we need to check that and called the pediatrician who could not locate Taylor’s femoral pulse, alerting him to the need to transfer baby Taylor to the children’s hospital. Mr Harvey said Taylor’s first open heart surgery was to patch the large hole in her heart and insert a gauze sleeve to “complete” her aorta.

“But complications from that surgery meant the nerve that helped the diaphragm expand and deflate was paralysed,” Mr Harvey said. “Her left lung collapsed about six or seven times over the next few months,” he said. “Her heart was fixed at that stage.

“Over the next six weeks, blood pressure wasn’t what they wanted and they needed to move the diaphragm out of the way because it was pushing on her left lung.” The second surgery was deemed essential even though the doctors did not want to operate because of Taylor’s weight.

“If they didn’t operate she may not have made it so they went ahead and stitched the diaphragm to her rib to move it out of the way of her lung and then did open heart surgery again to correct what wasn’t working from the first surgery.

“That surgery took eight to nine hours and it was a complete success. “That is what basically got us out of there.” Taylor was 12 weeks old when she was allowed to go home from Westmead, but her cleft pallet was not corrected until she was 18 months old.

She was tube fed until she was nine months old but feeding remained a struggle until corrective surgery. “Once we had the cleft pallet fixed, and she got through that as day surgery, she recovered very well and started feeding very normally.”

Amanda and Chris didn’t know Taylor was hearing impaired until she was three – the condition was due to a series of severe ear infections she had as a baby. The good news is that Taylor is “thriving” now that she is in Kindergarten.

Her younger sister Bodhi, aged three, is also hearing impaired but the condition was detected early and both girls are under the care of Hearing Australia. Taylor has to see the resident heart specialist at Westmead annually and will need further surgery to fix her Aorta as the current sleeve will not grow with her.

February is International Congenital Heart Disease Awareness Month, and February 14 is Sweetheart Day, the national awareness day for HeartKids, Mr Harvey said he doesn’t think many people are aware that CHD is Australia’s biggest killer of children under the age of one.

Eight babies are born every day with heart disease, and each week, four will die. Fifty percent of babies diagnosed with CHD will undergo major heart surgery before their fi rst birthday. Jayne Blake, HeartKids CEO, has announced the launch of a new CHD registry this month which will set a global benchmark for ongoing monitoring and treatment for those affected by CHD.

“Sweetheart Day is an altruistic way to mark Valentine’s Day by helping to mend a broken heart.” The sweetheartday.org website has merchandise that can be purchased with proceeds going to HeartKids or the charity is encouraging those interested to host their own fundraising events and use social media to spread the word.