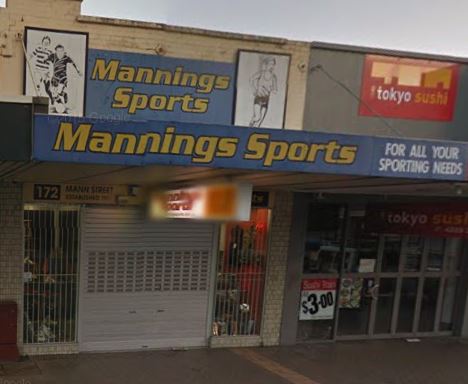 Mannings Sports has celebrated 85 years of continuous service to the Gosford community and is potentially the longestrunning retail business in Gosford.

Mr James Manning originally ran a successful business from 160 Mann St, Gosford, servicing the district as a ‘Ladies and Gents’ hairdresser and selling tobacco supplies. Disaster struck in December 1929 when fire destroyed the premises at 160 Mann St, and the building was repaired for about 2,000 pounds.

On April 12, 1930, James and Alice Manning of Gosford purchased the hairdressing business from Ms M Good. James then moved his business and purchased the newly-built premises at 172 Mann St in the spring of 1931 from Mr Delany, and continued hairdressing and tobacco supplies.

By 1954 the business had expanded to selling rifles, sporting goods and toys and was known as Mannings Sports Store. James was well liked in the town and known for his generosity and fairness. In the old days, all the merchandise arrived by train to Gosford Station and would be picked up with a trolley and wheeled down the lane to the back of the shop.

During the depression years, goods were hard to come by, especially tobacco. James’ son, Kevin Manning would make a weekly trip in an FJ Holden ute to Sydney and try to pick up merchandise wherever he could, to sell in the shop.

He was able to put his goods in the back of the ute in the middle of Sydney and never had to worry about anybody stealing anything from the open back. In the old days, the barber’s towels were boiled in a copper over a fire out the back of the shop in Baker St. Local boys such as Jack Quigley would get paid pennies to do the job of washing the towels.

Kevin Manning started full-time work in the business when he was 15 years old. He became an apprentice barber but decided it was not for him, and hence, the business branched out into sport and toy merchandise. Kevin worked in the family business for 57 years and retired at 72 years of age.

He ran a very successful business over the decades and became well known in the area. He was honoured to be presented with an Australia Day award in 2000 for his contribution to the business community on the Central Coast.

The business was an original member of the national Sportscene Franchise group for about 20 years before deciding to return to operating as an independent retailer.

Now trading as Mannings Sports, the shop was known for some time as Mannings Sportscene. Suzanne Tyrrell, Kevin’s daughter, started working in the store at the very young age of 12. She worked on and off before starting full time with the business when she was 32 years old and took over management in 1997.

Suzanne’s family has also worked in the business including Geoff, Ben and Evan Tyrrell. Rex Tracy, a well-known local, is Mannings’ firearms specialist, joining the business four years ago. Sarah Hole is a valuable team member and loves to talk NRL among other topics. Suzanne, Rex and Sarah are proud to be working and striving for excellence in serving the community.

“We are always trying to improve and like to give informative personal service to our many loyal customers,” Ms Tyrrell said. “We are celebrating 85 years in business in Gosford in the same location at 172 Mann St,” she said. “Now Mannings Sports is a modern thriving business specialising in sporting guns, archery, camping, knives, football gear, lawn bowls, fishing, water sports, darts, fitness and much more,” she said.