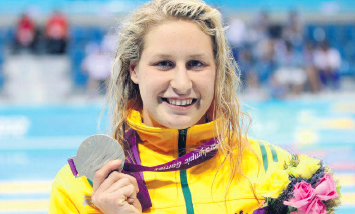 Taylor Corry has been chosen as Australia Day Ambassador for the Gosford local government area in 2016. Archive 2016

Ms Corry will be one of 140 ambassadors chosen from NSW’s most prominent sporting personalities, cultural leaders, medical pioneers and everyday heroes.

The Ambassador program has grown from just nine representatives in 1990 into an opportunity to showcase some of Australia’s inspirational and influential individuals. Ms Corry will spend Australia day visiting the Gosford LGA to participate in Australia Day celebrations including BBQs and concerts.

Taylor Corry, who has an intellectual disability, made her debut as a swimmer for Australia at the Global Games in Italy in 2011, where she was one of the stars of the meet, winning eight Gold and one Silver medal. Her career highlights include winning two silver medals at the 2012 Paralympic Games in London, the 100m Backstroke and 200m Freestyle. Taylor initially made waves at the 2009 National Underage Championships, winning three Gold and two Silver medals to underline her enormous potential. Still only a teenager who is yet to finish school, Taylor has continued to dominate all junior events that she has competed in and romped home with seven Gold medals from as many events at the 2011 Underage National Championships.

While she is extremely driven in her quest for success in the pool, Taylor enjoys her time hanging out with friends and tries to encourage them in their own pursuits. Having grown up in Anna Bay, on the NSW Coast and as a water person, it is not surprising that she also loves to go to the beach. Coach Tom Davis has been a long time mentor and influential figure throughout Taylor’s quickly escalating career. She uses Tom’s guidance and the achievements of contemporary Australian Swimmers Ian Thorpe, Geoff Huegill and Libby Trickett as motivation and inspiration.

Taylor’s simple goal for the future is to be the best she can be. She believes this attitude can carry her towards more personal best times and hopefully better her London performance in the Olympics in Rio 2016.