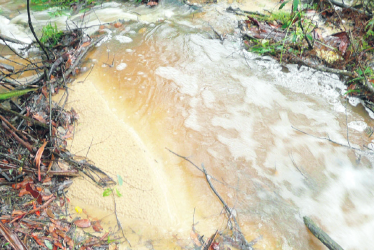 “Following the widely reported ‘uncontrolled discharge’ alleged to have occurred from the landfill site in 2015 and that subsequently appeared in Ourimbah Creek some 12 km downstream, the EPA said that it was conducting a criminal investigation,” Dr Goodwin said. “This has still not been resolved,” he said.

“As a result of the discharge and following repeated requests from members of the community, in late September, some two months after the event, the EPA had science staff from the Office of Environment and Heritage sample the water system in Ourimbah Creek and sources. “They also took foliage and sediment samples from the area of the discharge. “A week later, the EPA waste environment officer for Gosford LGA sampled water and sediment from the various ponds and accumulated water within the landfill site.”

Dr Goodwin said when he enquired about the results in January 2016, the environment officer told him the EPA was still trying to identify a correct method of analysis for the foliage. “As for the results from the water and sediment sampled from inside the landfi ll site, he couldn’t disclose these without seeking approval. “This is over three months after the samples were taken,” Dr Goodwin said.

In late November 2016, members of Mountain Districts Association met with Mr Scott MacDonald, parliamentary secretary for the Central Coast at the golf course. “During the conversation, a water cart appeared on the landfi ll site spraying discoloured water up into the air over the surface of the landfi ll,” according to Dr Goodwin. Dr Goodwin said periods of extreme rainfall, such as the 240 ml recorded by the official Bureau of Meteorology station on Bloodtree Oval at Mangrove over four days from January 4 to 7, resulted in signifi cant run-off at the landfill.

“When extreme rainfall events occur, such as recently occurred, any contaminants from such water will be washed off the surface and into watercourses and creek catchments,” he said. “Even EPA site inspections are worthless.” Following a recent community enquiry, Mr Rob Hogan, EPA director waste and resource recovery, reported that, following an EPA inspection of the Verde Terra facility (Mangrove Mountain landfill) on January 7, the EPA had found no storm water discharges at the time of the inspection.

Dr Goodwin said “This is only part of the story. “The day before the EPA visit, storm water discharge was noted gushing down a gully from the landfi ll site through private property in the direction of Hallards Creek catchment. “It was also freely fl owing under the boundary fence of the licensed area and downhill along a public fi re trail towards the same catchment. “There was also cloudy, foamy water gushing down another gully running alongside the boundary fence between the landfi ll site and national park. “When traced back, it was seen to be coming from within the landfill site.

“This water met up with a separate flow of water running down from the landfill site from a different direction. “This joined up to rush down the gully running alongside the golf course fi fth hole in the direction of the Stringybark Creek catchment. “Both Hallards and Stringybark Creeks flow into Ourimbah Creek, which feeds in to the Central Coast water supply. “Has the EPA sampled the run-off as it left the landfi ll site in the north east corner and if not, why not? “Clearly after such a major storm event, there is an expectation that there may well be signifi cant run-off that could be contaminated.

“Central Coast residents should be concerned at the inability of the Mangrove Mountain golf course waste landfill to adequately contain storm water, and to isolate leachate from other water sources,” Dr Goodwin said. “Mountain Districts Association is aware of the expectation of an 18 hole golf course from this activity, but clearly the emphasis is now on receiving large quantities of waste from Sydney and less about a new golf course and the failure of the EPA to regulate this, with any vestige of environmental safety, is a major concern for us all.”