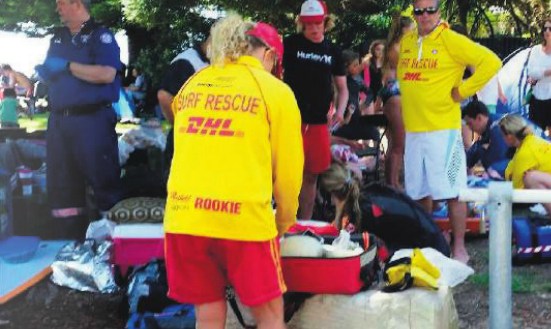 At least 20 people were knocked off their feet and smashed against rocks near the cliffs at the southern end of Avoca Beach at lunch time on Australia Day.

Mr Beswick said the incident occurred about 100 metres around the corner from the southern end of Avoca Beach on the ocean side near the spot known locally as the “mermaid pools.” “Three families had come up from Sydney for the day, they were picnicking near the pine trees near the car park at the southern end of Avoca Beach but they decided to go for a walk to give their kids a play in the mermaid pools,” Mr Beswick said. According to Mr Beswick, Central Coast beaches are currently experiencing what he described as a “long interval swell” due to the prevailing cyclonic conditions off the Queensland coast.

This means the lull between sets of waves can be very long and conditions may look fl at for 15 minutes or more at a time. “When the wave does hit, it can be unusually powerful because it has such a long time for the energy and power to build up,” Mr Beswick said. The wave that struck at Avoca on Australia Day was strong enough to knock at least 20 people off their feet and towards the cliffs. Fortunately, none were pulled back into the sea, although rescue craft were launched from the beach and several surf life savers reached the area on their rescue boards.

Mr Beswick said it was fortunate that the incident coincided with a life-saver shift change, which meant there were more life savers on hand than at other times. “Five people needed to be carried out on stretchers,” he said. The person with the most critical injuries suffered a broken leg and arm, another had a broken ankle and a dislocated elbow and a third had a dislocated shoulder. Others were treated for serious cuts with one man requiring 30 stitches to his leg and a 10-year-old boy was treated for concussion. Mr Beswick said those who sustained the most serious injuries were aged from 30 to in their 60s.

“The junior life savers who were just out of nippers and doing their fi rst season of patrols did an amazing job of caring for and bandaging those with minor injuries and just comforting the people who were in pain,” he said. “Other families having picnics at the beach gave up their chairs and towels and helped to comfort people with injuries.” Ambulance crews came from Terrigal, Bateau Bay and Point Clare to assist. “We were just thankful everyone got to go home,” Mr Beswick said.

“It could have been a lot worse, we were lucky none of the children was seriously injured and there were no spinal injuries,” he said. Mr Beswick said the lesson to the taken from the freak accident at Avoca was to “always respect the ocean and never turn your back on it. “Stand and watch for 15 to 20 minutes so you can assess conditions properly, it all comes down to respect,” he said. Mr Beswick said Australia Day is always one of the busiest days of the year on Central Coast beaches and patrols will continue until the ANZAC Day long weekend in April.