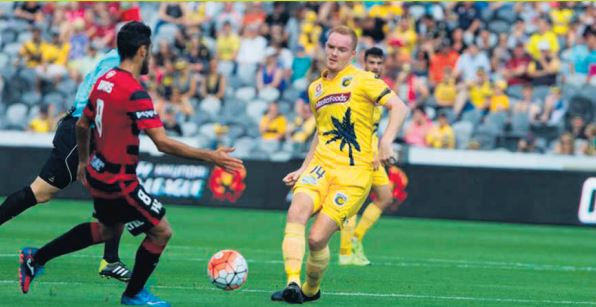 The Central Coast Mariners were defeated two goals to nil in their home game against the Western Sydney Wanderers on Sunday, November 28, 2015.

The first half at Central Coast stadium was largely an unremarkable display. The opposition may have been Wanderers by name but a couple of meanders out of the box by Paul Izzo in the first 10 minutes left home fans gasping.

Fortunately Mariners defenders plugged any holes left by Izzo’s wandering ways to avoid any early concessions. The first half was really a mid-field battle with some attractive footwork and passing by the Wanderers.

Izzo was able to redeem himself around the 14th minute by saving a shot from Romeo Castelen, who had an excellent game for the Wanderers from start to finish.

The Mariners started to look impressive for a period from the 20th minute with a great pass from Caceres to Rose giving us our first strong scoring chance and a period of solid passing and possession.

It was during this tract of play that captain Nick Montgomery slammed a shot towards goal from a corner that flew past the keeper but was off its mark.

By the half-hour mark the Wanderers were looking too fast and too efficient for the home team, dominating possession and feeding their attackers both down the middle of the park and from the flanks.

The last 15 minutes of the first half did display one of the best Central Coast Mariners’ defensive efforts this season.

The crowd fell silent when a whole bay and a half of Western Sydney fans (around 750) walked out of Central Coast Stadium in protest against what they considered to be the FFA’s lack of care for its fan base by leaking documents to the media that resulted in the identification of almost 200 “banned players” in the mainstream press.

Central Coast fans expressed their solidarity by remaining silent well into the second half. “No fans = No Football” was the home-side’s hand painted message to the FFA.

Around minute 36 Nikolai Topor Stanley made a whole-of-park, stylish run for the Wanderers, but couldn’t finish, with the ball bouncing off the left-hand post. Seven minutes before half time, Joshua Rose had a clear shot for the Mariners but it was successfully intercepted by former Mariner, goalkeeper Redmayne.

The Mariners found some attacking momentum down their left-hand flank that built into an on-target shot from Caceres that was again fended off by Redmayne. A Mariners’ free kick taken by Caceres five minutes before half-time didn’t amount to anything and a foul on Castelen resulted in a yellow card and a free-kick to the Wanderers that didn’t amount to much either.

The Wanderers raced to half-time with a flurry of attack and multiple chances that were successfully kept at bay by the Mariners. Castelen had the Wanderers’ best three chances of the first half and Caceres had the strongest opportunity for the Mariners, but the half-time score was a promising 0 to 0.

Santalab struck eight minutes after entering the fray before Nichols sealed the result in stoppage time. The Wanderers have now moved equal with Melbourne Victory at the top of the Hyundai A-League, while the Mariners are bottom after seven games without a win.

The win means the Wanderers are now on one their best winning streaks since they won 10 matches in a row in Season One. It’s the first time this season the Mariners have been held scoreless in a Hyundai A-League fixture, while they have yet to keep a clean sheet of their own.

Mark Bridge was a late scratching on the day injuring himself in the warmup and replaced by Dario Vidosic. The Mariners defence kept a high line most of the 90 minutes and the Wanderers exploited the space in behind regularly.

If not for an incredible late save by Andrew Redmayne, the Mariners could have snatched a point at the death. But it would have been more than their performance deserved, second-best for much of the contest.

There were some bright moments, but not enough consistency, the story of their season so far. The crowd was 10,519 with Wanderers travelling fans making up around 4,000 – let’s hope we get a good home crowd for the next game against Melbourne City.

The Western Sydney Wanderer’s fans staged their peaceful walkout just before half time in their game against Central Coast on Sunday, November 28 but it was the home side fans who expressed their disappointment at the second Wanderers’ goal just before full time by leaving the member’s stands early.

The FFA may have ongoing issues with its fan base but Tony Walmsley will soon catch up with his own issues if the Mariner’s “attacking style” doesn’t soon result in points. The match stats from the Central Coast Mariners’ home game against the Western Sydney Wanderers said it all.

The Mariners’ line up and formation looked strong but Matt Sim’s performance off the bench makes it difficult for fans to figure out why he is not in the starting 11. Young Matthew Sim’s dynamism off the ball, his speed and ability to find gaps in the Wanderers’ defense gave the Mariners’ some of their best chances in the match when he came off the bench during the second half.

The Central Coast Mariners were outclassed and some also say that they were they out-coached. The coach aims to have a dominant, attacking style of football, but the match statistics don’t truly reflect that aim.

Mariners disappointed not to get a point from Roar match