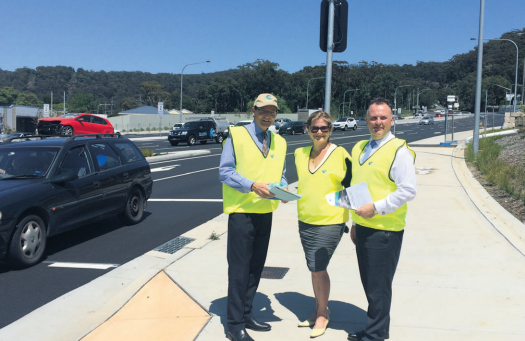 The NSW Government funded the upgrade of the Central Coast Highway at Brisbane Water Dve and Manns Rd to improve traffic flow, travel times and safety for the more than 70,000 motorists who travel on the road each day.

“The upgrade involved widening and realigning Brisbane Water Dve and Manns Rd on the Central Coast Hwy to form a single intersection with traffic lights.”

“The upgrade includes a new westbound exit ramp from the Central Coast Hwy onto the newly built Grieve Cl connection which has substantially improved access to local businesses in this area,” Mr MacDonald said.

“Traffic lights were provided at the intersection of Manns Rd and Grieve Cl to provide access to the Henry Kendall St and Jusfrute Dve industrial area.

“A system of shared pedestrian and cycle paths which connect to existing pathways were also provided along the Central Coast Hwy, Manns Rd and Brisbane Water Dve,” Mr Crouch said.

The project has been designed to accommodate traffic growth for at least the next 20 years. “Work by Roads and Maritime Services on the upgrade started in October 2013 and included numerous traffic switches to allow the project to progress,” Mr Crouch said.

NRMA president, Mr Kyle Loades said the NRMA had been strongly supportive of the West Gosford Project for many years. “It has been the number one Central Coast road priority that we have been calling for, and we are pleased to see that our efforts did not go unheard,” Mr Loades said.

“The necessary upgrades of these roads mean people living on the Central Coast will not only have better access to railway stations and local businesses, but they can get home to their loved ones faster and more safely.

“Our members on the Central Coast tell us year after year through our annual Seeing Red on Roads survey that these roads, including Brisbane Water Dve and Manns Rd have been constant sources of frustration for motorists.

“Thankfully these chokepoints and bottlenecks will now be improved so the people of the Central Coast can have access to the roads infrastructure they deserve,” Mr Loades said.

Community invited to have one last say on healthy lakes