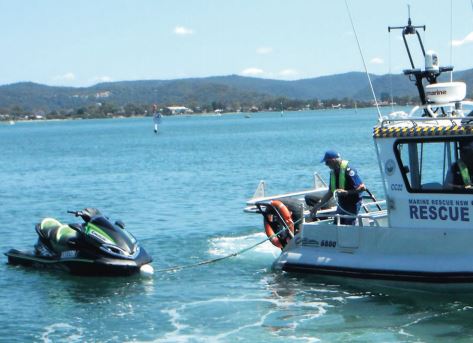 Marine Rescue Central Coast were called to assist a capsized jet ski on Sunday, November 1 at about 12 noon.

The local Roads and Maritime Boating Services officer contacted the radio room at Marine Rescue Central Coast with a report of the capsized jet ski with a person in the water near the western side of St Hubert’s Island bridge.

The crew on Central Coast 21 were alerted and they immediately went to the area. They could not find the jet ski but were signalled by people on a nearby wharf for help.

Beside the wharf, the crew saw a jet ski and trailer on their sides in the mud. Additional assistance was called and soon both rescue boats, Central Coast 21 and 22 and the unit’s rescue watercraft, Central Coast 11 were at the site.

The volunteers managed to get the trailer and jet ski right side up and float the ski. Large fenders were attached to the trailer and it was able to be floated back to the launching ramp where it was re-united with the jet ski.

An unusual but successful activity for all involved.

Davistown Walk on the Waterfront for Juvenile Diabetes

Wicks accused of being two faced over roads funding