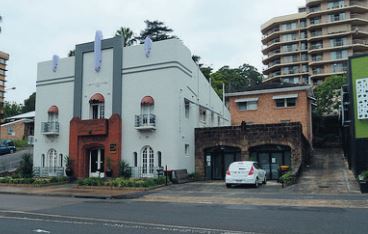 Amid the excitement and anticipation of new development and revitalisation in Gosford’s CBD, comes anger and dismay at the prospect of losing an important piece of the city’s cultural heritage.

One of just four historically significant heritage listed sites in Gosford, Creighton’s Garage (currently home to ReviveR classic cocktail bar), is at risk of being sacrificed to make way for a new high-rise mixed use complex on the site.

Celebrating its fourth birthday in July, ReviveR was founded with the intent of providing Central Coast locals and visitors with a bar reminiscent of the local bars and speakeasys of America’s infamous prohibition era.

The pair painstakingly brought the building back to its former glory, taking great care to not only preserve but feature the original Gosford sandstone that makes up the building’s foundations and the full length of one side of the building as well as its hand carved structural beams.

The Creighton family history in Gosford actually dates back much further than the 1930’s. Robert Creighton established the fi rm, RH Creighton in the Brisbane Water District in 1844 before moving to the Mann St premises in 1935.

The current Development Application calls for the protection of the building’s facade and the first 2 metres of the 10-metre wall only.

However this is contradictory to Gosford City Council’s Heritage Inventory, which clearly states that the building in its entirety is heritage listed.

The Heritage Inventory’s Statement of Significance highlights that The Creighton Funeral Parlour and its associated garage buildings are, “a fine and rare surviving example of the art deco style in the Gosford area with local signifi cance and additional value for the contribution to the streetscape in the prominent corner location.”

While Mr Ryan said he is not in any way opposed to development of the site, he strongly believes any development should be sympathetic to the original building by keeping it intact.

“The only heritage listed buildings left in Gosford today are the Court House, the School of the Arts, St Mary’s Church and the Creightons building,” said Mr Ryan.

“We simply can’t afford to let development wipe away what little is left to tell the story of our past for the benefit of future generations.” Mr Ryan and Ms Rungis also made it a point to emphasise that their stance on protecting the building has little to do with the business they run, which they feel would be supported no matter where it is located.

They said they are simply passionate advocates for fi nding the right balance between development and preserving our link to the past. The Development Application is currently on public display at Gosford City Council.

The opportunity to lodge a submission to oppose the development as it currently stands ends on November 6.