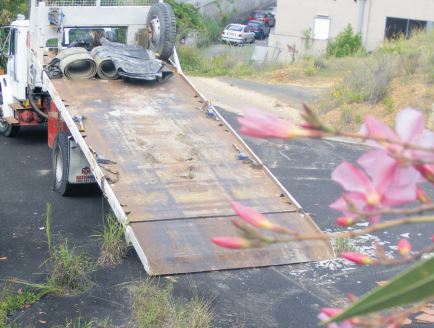 Initial site preparation has commenced at the site of the Quantum Towers development at 7 Watts St, Gosford backing on to Henry Parry Dve.

“They are just beginning with security fencing and some light site preparation before Christmas and we have been told construction will commence by the end of January and is expected to take 18 months,” Mr Gilmour said. He said securing finance is often a stumbling block for developers with projects in Gosford.

“It can be a stumbling block because of the big five [banks] not having confidence in Gosford,” he said. “In the past, projects in Gosford were started and then folded, and the banks lost money.” However, according to Mr Gilmour, Tilrox “hung in and persevered until they secured finance for the project”.

The Quantum Towers development consists of two 14-storey towers and the development application was approved by Gosford Council around two years ago.

Mr Gilmour said 80 of the 110 one and two bedroom apartments have already been sold with two-thirds going to investors and the other third purchased by owner-occupiers.

The main selling features of the project have been its mid-point price range, proximity to Gosford train station and the split-level design of most apartments that will allow flow-through.

Some of the apartments have three balconies offering views to Rumbalara reserve and Brisbane Water. The complex has underground parking, a small amount of retail and commercial space, a pool deck and gardens. Mr Gilmour said some of the remaining apartments will be placed on sale in the new year at a price point of around $400,000.