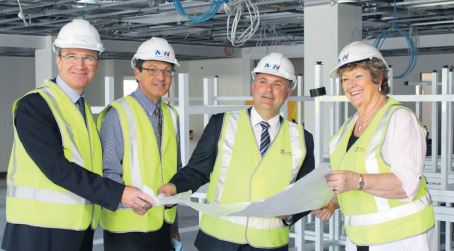 Early work is continuing on-site in preparation for major construction to commence next year. The Health Services Building is currently being refurbished to allow for the relocation of pathology, physiotherapy and neuropsychology services.

Ms Skinner said this year’s NSW budget included $30 million to continue works. “I am pleased to see everything is on track for the development, which will transform the facility and deliver vital services like a new cardiovascular service, more medical imaging services including nuclear medicine, and a rehabilitation unit for the Central Coast community,” Ms Skinner said.

The redevelopment will provide a new and larger emergency department and intensive care unit. Maternity services will increase to include more beds, birthing rooms and special care nursery cots.

The redesigned hospital will include a new main entrance off Showground Road instead of Holden Street which is very steep, as well as more open space, dedicated patient lifts and improved navigation around the hospital.

It will also include a new multi-storey car park and a relocated helipad on top of the main building. Mr MacDonald and Mr Crouch announced the project’s early contractor involvement tender to Lend Lease in October and were impressed with the progress made so far.

Mr MacDonald said: “Lend Lease is working closely with Health Infrastructure and the Central Coast Local Health District to prepare the site for main works construction and to finalise the design documentation.”

Mr Crouch said: “The Gosford Hospital redevelopment is an important project for the Central Coast.” More than 300 staff have been relocated to other parts of the hospital campus or other Central Coast Local Health District facilities over the past six months to enable preparation for demolition of some existing buildings.