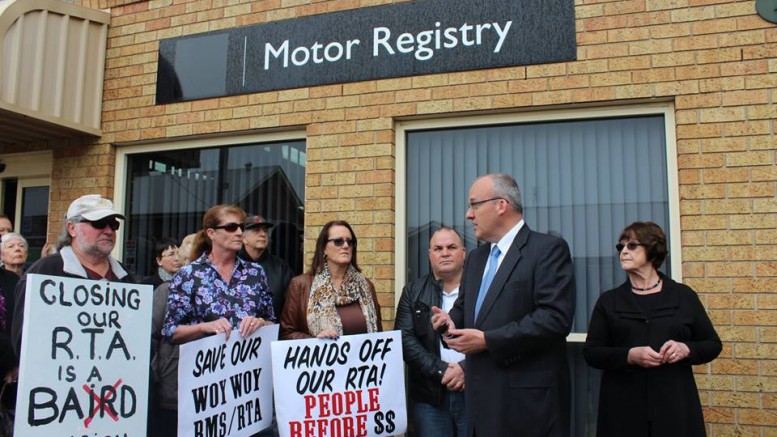 The late Kathy Smith MP with Luke Folley and residents of Woy Woy protesting the closure of the Woy Woy RTA.

A new Service NSW office will be opened at Erina but member for Gosford, Ms Kathy Smith MP has argued that it should be in Umina.

“Following the community fight I have led protesting the closure of the Woy Woy Motor Registry and asking for another Service NSW office for the southern end of the Central Coast, we have managed to convince the NSW Baird government that an additional outlet is necessary,” Ms Smith said.

“However, instead of announcing that this facility will be on the Peninsula, it is to be located in Erina, a safe Liberal seat with a Member of Parliament who lives on the Woy Woy Peninsula but who wouldn’t help our fight for equal access to services,” Ms Smith said, referring to member for Terrigal, Mr Adam Crouch.

“Even though thousands of residents in his own electorate signed the petition in support of services in Woy Woy, the Terrigal Member did nothing to help them,” she said.

“This Government helps its own but does little, if anything, to help those most in need.

“This move will cause much disappointment and I dare say bitterness for the 36,000 plus residents on the Woy Woy Peninsula as well as the many more thousands in surrounding suburbs and we won’t forget the disdainful way we have been treated when voting time comes around.”

Business, On the Beat