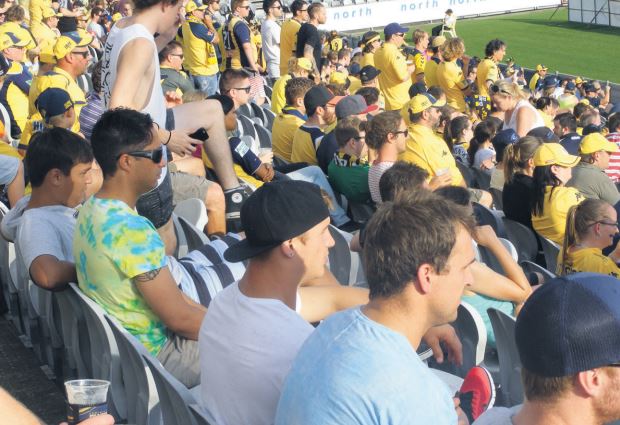 A bad night at the office for Roy O’Donovan, an empty supporters’ bay and an on-song Melbourne City side all had a part to play in the Central Coast Mariners’ harrowing 1 to 5 loss at Central Coast Stadium on Thursday, December 3.

In fact, Melbourne City FC gave the 4,500 faithful Coast fans (those who didn’t join the Yellow Army match boycott at ‘the pub’) a memorable demonstration of what entertaining attacking football looks like.

It was always going to be challenging to get Central Coast families to attend two home games that were only four days apart and most had elected to attend the afternoon game against the Western Sydney Wanderers on the preceding weekend.

The other reason the stadium was eerily quiet was summed up by the ‘Gone to the pub’ banner at the front of the usual supporter’s bay. Even the brass band decided to join the ongoing protest by A-League supporter groups against the FFA’s banning policies by boycotting the match.

The Central Coast Mariners took to the field with a formation change and, essentially, a brand new back line, in the match against Melbourne City.

For the first 20 minutes the fresh back line combination of Joshua Rose, Jake McGing, Jacob Poscoliero and Storm Roux looked like they might be able to put a lid on the home side’s habit of conceding early goals this season.

The Mariners seemed to be willing to build attack from the back line and the opening 20 minutes saw some good team work between Anthony Caceres and Nick Fitzgerald down the right side of the field.

A cross from Melbourne number nine Harry Novillo to Aaron Mooy looked promising for the visitors but was effectively dealt with by Josh Rose.

Mariners’ lone striker Roy O’Donovan missed two early chances which could have greatly changed the whole complexion of the match. Harry Ascroft also looked bright for the Mariners in the opening quarter, but received a warning after a foul on Ivan Franjic at the 10 minute mark.

Novillo started to make his mark on the match from about the 15th minute and the pressure was defi nitely felt by the Mariners’ defenders and midfield.

Goal keeper Paul Izzo was able to deflect a pretty brash shot from Novillo at the 16th minute. Shortly after, Anthony Caceres cleverly drew a foul, resulting in a yellow card for Jack Clisby, and took a free kick for the Mariners that was knocked away by Patrick Kisnorbo, recovered by Mitch Austin, but ultimately ended up back in Melbourne City’s possession.

Mitchell Austin showed his attacking potential with an excellent length-of-field run, but his pace could not be topped off with any goalscoring prowess from the home team. Austin made another great run at the 24th minute and his pass did connect with O’Donovan on that occasion, but the striker was unable to convert.

Shortly after, Harry Novillo did an excellent job at the other end of the park giving Melbourne City a one-goal lead and giving him his third goal for Melbourne City in three games. The demeanor of all 11 Central Coast Mariners players did noticeably dip as soon as the visitors scored.

At several points between the Novillo opener and the half-time whistle, the Central Coast Mariners put together promising periods of attacking play and, at times, looked like they deserved to score.

Roy O’Donovan certainly couldn’t complain about the service coming from his midfi eld – it just was not to be his night. Harry Ascroft managed to stave off a cross from Mooy to Navillo just before half time, but then a sloppy Poscoliero pass gave Bruno Fornaroli, with help from Paartalu and Navillo, the opportunity to make sure the Mariners went to the change rooms in no doubt about which team was in control with the gap widening to 0 goals to 2.

Shortly after half time, Nick Fitzgerald had a great run and a direct shot on goal that was the best of the game thus far for the Mariners. Seconds later the Mariners were attacking again, but a cross from Mitch Austin could not connect with anyone to result in a goal.

Mid-field tussles and glimpses of attack from the Mariners characterized the next 15 minutes of the match. Good work from Fitzgerald and Roux around the 52nd minute again failed to ignite O’Donovan and a quick counter-attack saw Izzo fumble and nearly take Melbourne to a three goal lead.

A frustrated punt from Fitzgerald shortly after was an easy save for Melbourne’s keeper Thomas Sorensen. At the 57th minute Novillo did score a third goal with a shot across the keeper. It was very much an individual effort but it did cut through several Mariners’ defenders to get there.

With half an hour remaining, Austin, Caceres and Fitzgerald combined to attempt to save face for the home side, but their efforts were easily thwarted by a sound Melbourne defence. At this point, Walmsley’s coaching for the home side started to look questionable.

His replacement of Josh Rose with Michael Neill had some home fans scratching their heads.

Shortly after, Ascroft was replaced with the fresh defender Tomislav Uskok to make his first A-League and Mariners appearance. Melbourne City ramped up the pressure on the Mariners’ defence with a string of corners leading in to the 70-minute mark when O’Donovan was replaced by Joshua Bingham as the Mariner’s fi nal substitution.

Bingham looked like he might make a difference for the home side with a promising run, but Melbourne’s fourth goal came shortly after – a Mooy assist for a Stefan Mauk finish.

Uzkok’s debut was somewhat marred when he accidentally and literally knocked out team mate Storm Roux, resulting in Roux being removed from the field with suspected concussion and reducing the Mariners to 10 men for the remaining 15 minutes.

The home side defended bravely for that 15 minutes and Mitchell Austin gave the Mariners one goal with a stylish penalty shot into the right hand corner of the net.

McGing, Fitzgerald, Liam Rose and Mitchell Austin continued to try their hardest, but the weight of the score was crushing and five minutes extra time seemed like extreme punishment for the Mariners’ squad.

Emotions can be difficult to contain when a team is three goals down at home, and when a free kick to Melbourne City, taken by Mooy in the final minute of extra time, gave the visitors the goal that buried the game, the local supporters decided to be the first out of the car park.

Melbourne City showed superior skill and style with a performance worthy of finals football. The Mariners players looked crushed as they shook hands with the supporters who did stay the course.

Now in eighth place with only five points, Tony Walmsley has an uphill battle to restore the faith of fans and players in his “play to entertain” mantra.