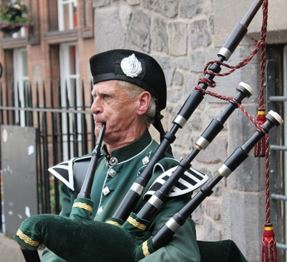 Douglas McFarland has announced the official commencement of his sophomore album ‘Rhythm of the Dancer’, a Highland Dance CD produced by Central Coast based entertainment company, JC Entertainment.

Mr McFarland released his debut album ‘Good Times with the Wilson’ in 2007. The recording was dedicated to the memory of Central Coast police officer, Gordy Wilson, who was killed while on duty.

This new series of music from piper and highland dancer Douglas McFarland includes all the essentials plus some added inspiration for those wanting to perform Highland and Scottish National dancing to the best of their ability.

Mr McFarland said he was thrilled to be back in the studio with his bagpipes recording music that will motivate and drive dancers of today. “Since releasing my first album in 2007, I have had many, many requests for an expanded version.

“The Rhythm of the Dancer series will cover traditional Highland dances, traditional Scottish National Dances and a number of rarities for dancers and teachers to use as they wish” Mr McFarland said.

It is an exciting new project for local musicians lead by James Callaghan from JC Entertainment. “I have been fortunate to perform with Dougie before in the Youth in Performing Arts Concert Series, but have never recorded bagpipes.

“I have a great engineer, Mr Tim Turner who has spent the time to make sure we were able to capture the best sound possible,” said James. “It’s unique. “Being a drummer, I love drums, but there is something special about drums and bagpipes.

“Dougie came to me with the idea of combining bagpipes with not only drums but contemporary instruments to create a Dance CD that is unique, engaging and exciting. “It’s exciting to think that this CD will inspire the next generation of Highland dancers,” he said.

Douglas is happy to be working on his latest project with a local Central Coast company. “It was important that I work with a local production team. “I was educated in both Highland Dancing and Piping here on the Central Coast.

“I am proud of this great place and so I needed to use local talent to create this musical journey which will travel around the world,” he said. “It was always going to happen, the inspiration to get into the studio now was a combination of opportunity and desire.

“It is the right time and I have the right people around me to make the album”, he said. “The Central Coast is such a small tight knit community. “We have some great local companies who have great products and services to offer.

“It’s exciting when two local companies can work together on a project that’s going to benefit the community,” said James Callaghan. The CD will be used on an international scale, it can be utilised for dance training purposes and for competition conveyors worldwide.

Family, community and party … a champion of the Coast passes