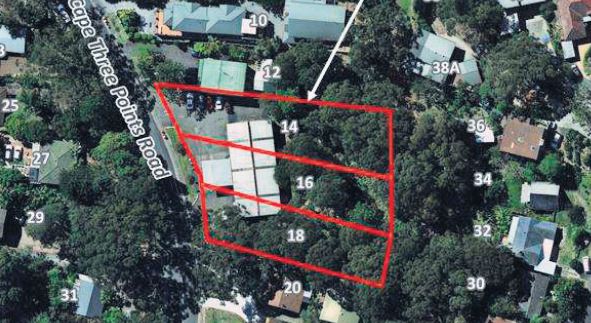 A development application for a proposed five-storey mixed use building on Cape Three Points Rd Avoca Beach has been approved by Gosford Council at its meeting on Tuesday, December 8.

It was the fourth time in 2015 that the development had been discussed at a Gosford Council meeting The plan was submitted on February 17 and amended plans were submitted in March and May.

Fifty five submissions were received objecting to the proposal and the key issues were size and scale being out of keeping with the locality and concerns with parking and traffic safety in Cape Three Points Rd.

The matter was deferred at Council’s August 11 meeting to allow a further site inspection with particular emphasis on the height of the proposal compared with adjoining properties.

The architect was also asked to provide a photo montage showing indicative levels of the proposal and adjoining development. The site inspection took place on September 15 and was attended by five councillors, three council officers and approximately 20 members of the public.

Issues raised at the site inspection by councillors and members of the public included bulk and scale, inaccuracies in the traffic report and insufficient parking.

The architect did not submit the requested photo montage, individual storeys were not indicated on the height profiles and the height profi les weren’t located in position to indicate the external corners of the building.

The architect, who was present at the site visit noted that the architectural plans would be modified to delete proposed roof top terraces above two units.

The staff recommendation to the December 8 ordinary meeting of Gosford Council said that council give consent for the development comprising ground level retail, with 27 units of shop top housing and a basement car park.

The development will be located at 14, 16 and 18 Cape Three Points Rd and will be subject to conditions including the provision of 17 spaces for visitor parking and common property in any future strata plan.

The subject land is located on the southern edge of the Avoca Beach local commercial zone and adjoining land to the south, east and west is zoned low density residential.

As a result, it was the conclusion of both Gosford Council staff and a majority of councillors that nearby residents in the low-density residential zone needed to expect that the form of development likely to occur can reflect an adjoining zone.

Cr Chris Burke referred to the nearby Avoca Palms property as an example of a development of similar bulk and scale to the project in question and stated that it was a well-accepted part of the local area.

The approval of the project was carried by one vote with councillors Scott, Morris, McFadyen and Bocking voting against the motion.