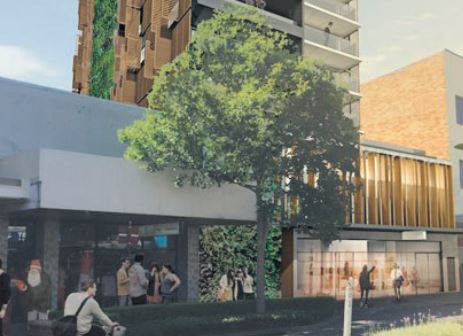 A major development worth around $17.6 million in the heart of Gosford’s city centre has been approved by Council.

The 14 storey mixed use development comprising a ground floor tavern, 75 residential units and basement car parking level will be built on the current Duttons Tavern site in Mann St.

This development will maintain and upgrade the tavern that currently serves the surrounding area, provide new residential opportunities that support Gosford’s development as a regional city and is located close to public transport.

The maximum height of the development complies with the Gosford Local Environment Plan but a minor variation in the fl oor space ratio has been approved. Allowances have also been made for car parking.

The existing tavern does have some ground level parking at the rear in Paul Lane and there will be one level of basement car parking.

Earlier plans for the development included a level of parking above the ground fl oor but issues of overshadowing Kibble Park meant the plans had to be revised so the development will only provide 33 parking spaces.

The owner of the site, Mr Bob Bourne addressed the council meeting before the development was approved. Mr Bourne said the fi rst development application he attempted to get approved through Gosford Council in the early 1970s took eight years to get accepted.

Mr Bourne said, on this occasion, the professionalism of council staff had been “breathtaking”. Mr Bourne suggested that the nature of the new Mann St development went handin-hand with the rejuvenation of Gosford hospital and could provide future homes for hospital staff.

The owner of the building that adjoins the development site spoke against the motion. He complained that a quantity surveyor’s report had not been released and questioned how he could make comment on the development without seeing its contents. He was informed the report could not be made public because of copyright.

He said he had owned the property adjoining the development since 1995. He said he had been contacted by a party representing Mr Bourne in 2013 to offer around $2 million to purchase his building and land.

“I have had some discussions with Bob over the years and I told him some months before he lodged this development I was prepared to sign as consenting owner if he wanted to include my property, if he would pay costs of DA approval and it would be adjusted on sale to any purchaser.

“He did not accept my letter and I can’t sell to someone who wants to buy my property for only a fraction of what it is worth.” A report to the council meeting referred to the potential of the neighbouring property, which is located between the Bourne development site and the Imperial Centre, to become “isolated”.

He complained that Gosford Council had not sent him information regarding the redevelopment prospects of his site. Deputy mayor, Cr Craig Doyle questioned whether or not council had addressed all concerns relating to the neighbouring property.

Director for governance and planning, Ms Danielle Dixon said Council did have an obligation to look at the adjoining property and make sure this site has acceptable setback and that staff were comfortable the site could be developed and the setbacks were adequate.

However, Ms Dixon said it was unlikely the adjoining property would be developed to the same scale. “If you only have one site then you are constrained, which is why we gave preferences and additional incentives. “We think there is a possible development than can occur on that site but not to the same scale,’ Ms Dixon said.

Most councillors who asked questions about the Bourne development were mainly concerned with the issue of available parking. Mr Bourne was allowed to substitute some parking spaces by undertaking to run a mini bus for the tavern.

It was resolved that the proximity of the building to Gosford train station and bus routes meant that some units could be sold without an attached car space. Cr Gabby Bowles said parking was her main concern but concluded that she didn’t think it was a bad thing to have reduced parking spaces.

“We should be pushing people to more sustainable and public transport,” Cr Bowles said. “I think this is a positive and unique opportunity because it is in the heart of our city and will accommodate people who don’t necessarily want their own car,” she said.

“Tying parking spaces to properties in the strata plan gives price points that we may not otherwise have in our city and it will improve the city,” she said. “We need people living in our city if we want it to thrive. “This is a really creative and positive outcome to encourage those who do not want to own a vehicle.”

Mr Bourne told the meeting he was eager to progress the development to construction certifi cate stage as early as possible in 2016. Almost $460 million worth of development has now been approved for Gosford’s City Centre by Council and the Hunter and Central Coast Joint Regional Planning Panel.