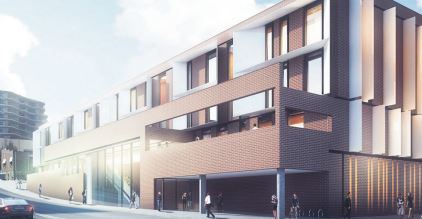 Federal Member for Robertson, Ms Lucy Wicks, addressed local businesses at the Gosford Chamber of Commerce on October 29, regarding the Commonwealth Agency building to be located on part of the former Gosford Public School site.

Ms Wicks said Gosford was on the precipice of a new era, with seven million dollars committed from the Federal Budget for the proposed Kibbleplex (the concept), building applications, infrastructure and the University of Newcastle’s plan to bring world class education to the heart of the city.

Ms Wicks addressed concern over the development process of the ATO on the old Gosford School site. Ms Wicks said the Commonwealth Government, through the ATO, issued an EOI for the lease of the building.

It had specific requirements (an A grade centre of excellence including A grade design and facilities) and the tender was not to buy a piece of the land but to lease a building for at least 10 years, but up to 20 years.

Ms Wicks said it was an open competitive tender that received 14 applications before the announcement of the successful tenderer, Doma Commercial.

“The ATO site was on a portion of the old school site. “We know what happened after that.

“We know there was a front page of the newspaper that seemed to indicate that this building would utilise the entire site and we know that there have been demands to have the building moved,” Ms Wicks said.

“The old school site, land owned by the State Government, was to be sold by the 2010 State Labor Government to put money back into education, and when that plan was announced in 2012, the plan included things like a commercial building, and a mixed use residential building.

“The plan for the Performing Arts Centre was announced on what is locally known as Poppy Park, and to the best of my knowledge, the response was overwhelmingly positive.

“So I had to ask myself, after the cacophony of noise after the announcement, why were concerns being raised some three years after a plan had been announced and it was beginning to take fruition?

“The ATO, which is an independent statutory arm of Government, ran a tender process for the tender of a building and a sale of land. “It was an open and competitive process run at arm’s length of Government.

“If we are going to get best value for taxpayer’s dollars, it needed to be this process,” Ms Wicks said.

In response to concerns from the winning tender not being local, Ms Wicks said she would back anyone willing to invest in Gosford. “After 20 years of plan after plan failing, I welcome investment into Gosford.”

Ms Wicks said the precinct is a 10 hectare site rezoned to include the old school site which takes up only one hectare.

Ms Wicks also said opportunity to comment was given back in 2012, and that since 2012, this was always going to be a commercial development. She acknowledged the community’s desire to see a performing arts centre in Gosford.

“I have listened to this and would love to see a performing arts centre in Gosford, it would have a great economic and cultural effect on the region.

“But there are several iterations of where this performing arts centre should be, but we still haven’t got the money to be able to build it,” Ms Wicks said.

“I will say to you upfront, that I have committed personally to seeing the performing arts centre built, and I will do everything I can to fight for the remaining funding so we can actually see it built.

“The other thing I want to say, in light of all these misconceptions, is that the one inescapable fact is that this government is the first government to make a commitment like this in many years to the centre of Gosford,” she said.

Ms Wicks concluded that despite several misconceptions surrounding the development and the site of the ATO building, everything being done was to kick-start the process of making Gosford great.