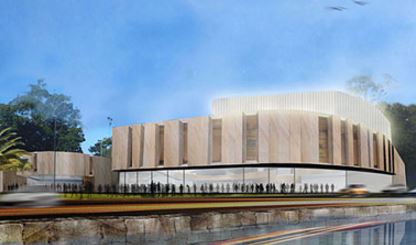 Frustration and confusion grows over the location of the performing arts centre proposed for Gosford.

“There have been some significant media announcements in the last few weeks which suggest a further dramatic shift in the performing arts precinct’s location journey,” Mr Mark Thomas, President of the Friends of the Performing Arts Precinct (FOPAP) said.

FOPAP has explored countless venues over the years in an attempt to build a regional performing arts precinct, submitting plans in 2013 to locate the performing arts centre below the war memorial in Rotary Park.

“This was the only ‘shovel ready’ site and was supported by the CCRDC, State and Federal Governments and initially by the RSL,” Mr Thomas said.

“The school site, or part thereof, has always been the preferred location for the Regional Performing Arts Precinct (RPAP) by a signifi cant percentage of the community,” The FOPAP invited Gosford mayor, Cr Lawrie Mckinna, to be guest speaker at a meeting to shed light on the council’s vision for the performing arts centre.

“Frustratingly this information has yet to be released,” Mr Thomas said. “We continue fruitful discussions with council on the issue.

“It is incomprehensible that Gosford, a city of this stature and population, does not have a town hall, let alone a community performing arts precinct,” he said.

Mr Thomas supported members of the community and the enthusiasm the performing arts centre has received. “I encourage you to continue this enthusiasm and let us make this cultural heart of Gosford City a reality.” Mr Thomas said.