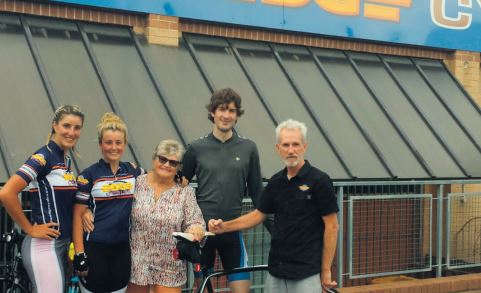 Central Coast grandmother Genny Murphy was bursting with pride on Friday, November 13 when her granddaughter Maggie Mills arrived at West Gosford on her bicycle as part of an epic ride from Coolangatta to Cronulla.

Ms Murphy said she was proud of Maggie, who was one of three friends who decided to take on the challenge of riding from the Queensland border to the southern Sydney beachside suburb to raise money for Leukaemia research.

Millie now lives with her mum and dad near Coffs Harbour, but grandmother Genny said the family’s sense of sportsmanship and community was developed on the Central Coast.

“Maggie’s dad, Bruce Mills was a cricketer who played for Woy Woy and the Northern Districts, in fact he captained Adam Gilchrist and Mark Taylor,” Ms Muprhy said.

“My daughter Karen was a representative netball player and Maggie is a sports tragic who is a cyclist and plays cricket, rugby union, soccer and played futsal for the North Coast in Brasil. Before and during the ride, they raised valuable funds for the Leukaemia Foundation.

Ms Murphy organised the bulk of the fundraising with a huge trivia night and auction in Coffs Harbour raising $5,000. As they passed through the Central Coast on Friday, they visited The Edge Cycles at Gosford where owner Dean Leslie kitted them out with riding shirts and gave them some muchneeded local knowledge on their final leg to Cronulla.

They had a well-deserved rest at granny Genny’s house on Friday night before embarking on their fi nal day’s ride on Saturday morning.