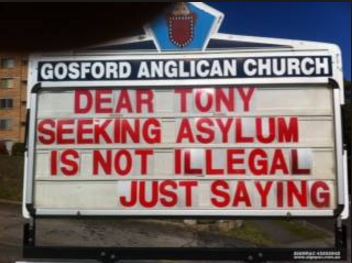 Mr Julian Burnside QC AO, and Professor Patrick McGorry AO join Father Rod Bower for an afternoon discussion on the impact of past, present and future border protection policies on the wellbeing of asylum seekers.

The event will be held at Gosford Anglican Church on December 13. The distinguished guest speakers will address the issue from their own specialised areas of expertise.

Men of incredible intellect, determination and compassion, the audience will no doubt be enlightened and inspired by their words. Audience members will have the opportunity to ask questions after the final speech.

There will also be the chance to mingle and continue discussions when afternoon tea is served at the end of the event. In addition to the speeches, there will be a very special musical performance.

“Paeezeh Zendegi – Autumn of Life” will be performed (for the very first time) by an orchestral ensemble of local Central Coast musicians. Composed by Caitlin Yeo in collaboration with Salar Hs, “Paeezeh Zendegi” features a solo performance by Persian violinist Salar Hs.

This event will be filmed for the television documentary “The Shadowland”, an independent production that has been commissioned by the ABC as a “Compass” special for 2016.