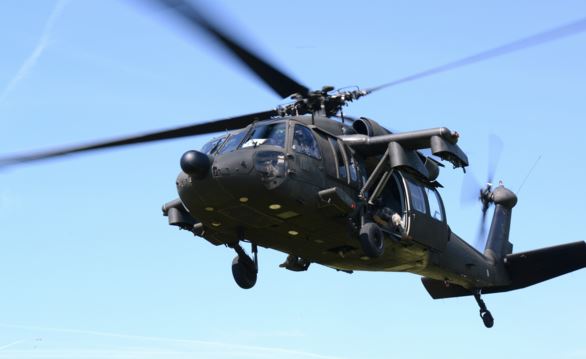 The Australian Defence Forces have confirmed that some residents in the Gosford local government area may be impacted by “unavoidable noise disturbances” due to a training exercise.

“Residents in the Central Coast could see Army Black Hawk helicopters in the skies during a training exercise being held in the region from November 11 to 19“, a defence spokesperson said.

“Up to five Black Hawk helicopters will transit from their base at Holsworthy in Sydney for the training,” she said. “The aim is to ensure pilots and aircrew are well trained for flying in all conditions across urban and rural areas.

“The aircraft will be flying over various locations, from Gosford through to Newcastle, Williamtown, Singleton and surrounding areas, with training scheduled for the afternoon and evening, up to 11.30pm.” The Black Hawk is a multi-role helicopter that provides air mobility for troops and equipment in the battle zone.

Ms Pamela Lemoine of East Gosford found an unaddressed letter in her mailbox on Monday, November 2 informing her of the training exercise and possible noise disturbance.

On Tuesday, November 3 the Australian Defence Force confirmed that the exercise would be taking place and that some residents in the Gosford region may be impacted by related noise.

The letter that was placed in letter boxes was from the Department of Defence and said: “The Australian Defence Force will be conducting training in the Greater Hunter region, including Singleton Military Training Area, RAAF Williamtown and Gosford between the dates of November 9 and 19.

“This routine training is designed to provide a realistic test of Australian Defence Force skills and interoperability with supporting State and Federal agencies in the form of emergency response scenarios. “NSW Police and relevant state and federal agencies are fully aware of, and involved in, this training.

“During the training, the Australian Defence Force will be using helicopters near the urban areas which may result in some unavoidable noise disturbance.

“Helicopter movements may unavoidably go beyond 11:30pm. “The activity will affect your area for only a few days during this period. “The Australian Defence Force will make every effort to minimise the disruption to local residents and businesses while providing realistic training for its members and state authorities.

“This is a role of national strategic importance and it is crucial Defence’s air crew train to maintain their skills. “Many emergency response scenarios require operation of aircraft at low level in the urban environment, necessitating training that must be performed in an urban environment, and at low levels.”

According to the letter, Defence takes measures to reduce the inconvenience caused by such activities including rotating exercises between different states and areas within them, using training venues only once in any training period and limiting fl ying to the minimum necessary.

“The training is extensively planned, will be conducted with all relevant safeguards, and poses no danger to the public. “Members of the public should not be alarmed at the activity and the unavoidable short term noise disruption is deeply regretted,” the letter said.