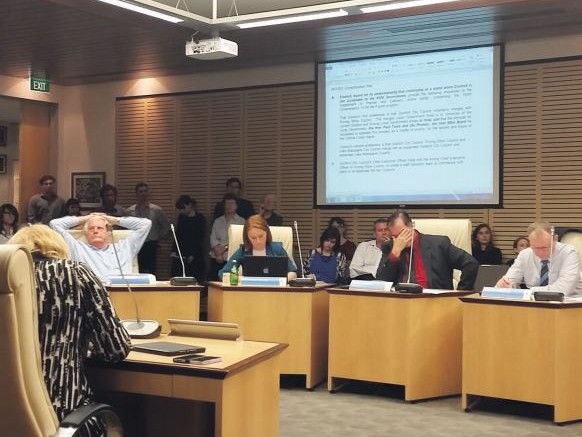 Seven out of 10 Gosford councillors have voted to inform the NSW Government they are willing to amalgamate with Wyong Council.

The NSW Government has required all NSW councils deemed “unfit” to stand alone to make 50-word submissions by November 18 outlining their amalgamation preferences. Gosford’s deputy mayor, Cr Craig Doyle moved that “… based on its understanding that continuing as a stand-alone Council is not acceptable to the NSW Government…

“I find it hard to believe that we haven’t been provided a choice as councillors,” Cr Doyle said in opening discussion on the proposed motion. “As a working party, we took the opportunity to meet with the minister to express our fears, and I must say, they were met with respect and concern,” he said.

Cr Doyle said a meeting with the local government minister, Mr Paul Toole did allay his fears about having no say in the process “a little”.

“I say a little, because I still have some concerns that a voluntary forced amalgamation is our first choice,” he said.

He said Wyong’s early move, by a margin of one vote, in favour of the formation of a Greater Central Coast Regional Council through a merger with Gosford, stymied the debate about options available to Gosford.

“I really think we have been bullied and coerced into a corner from which there is no recovery,” he said. Cr Hillary Morris said she would not vote in favour of the amalgamation.

“I find it incomprehensible that we have been told to amalgamate or else,” Cr Morris said, citing the fact that IPART had found Gosford to be financially sustainable. “What happens if we stand alone?” she asked.

“I don’t agree that we don’t have a choice; we are denying our residents the right to a voice.” Cr Morris outlined the legislative process that would need to be followed if Gosford did elect to defy the minister’s advice and state a preference to stand alone.

She questioned whether the $10 million funding promised to councils who volunteered to amalgamate plus $10 million for infrastructure would come near to covering the costs of amalgamation.

“In our submission we talked about figures of $37 million and $31 million, that leaves a shortfall of $48 million. “Where will it come from, the sale of assets, the sale of public land, a special rate variation?

“I will refuse to succumb to the bullying of the state government for a paltry $20m,” she said. Cr Gabby Bowles added: “It really does feel like we have been backed into a corner on this one.

“I would ordinarily be putting up one hell of a fight but the State Government has been very clever and would not be heading into this situation if they were not confident of the outcome,” Cr Bowles said.

“While amalgamation would not be my preferred situation under ordinary circumstances, I believe what we are facing now are exceedingly extraordinary circumstances.” Cr Bowles said she would support the motion on the basis that it meant Gosford’s elected representatives would remain in their roles until the September 2016 election. “I believe it is imperative our community has a voice throughout the process… Gosford’s assets, infrastructure and staff, we can’t fight for them if we are not here,” she said. Cr Jeff Strickson said the benefits of amalgamation could be as much as $196 million over 20 years and that was “too much to gamble”.

Who is going to pick up the shortfall if we don’t amalgamate?” Cr Strickson asked. “I believe it is for the best intentions of the rate payers for the two councils that we do amalgamate and carry on so we can represent the people of the new area,” he said.

Cr Bob Ward said he would support the motion because a single voice for the Central Coast would give the region strength on planning issues.

Cr Deanna Bocking spoke briefly to thank the community for its support and passion along with the staff, CEO and fellow councillors.

Cr Vicky Scott said: “I can’t believe that there are so many apologies for the way people are going to vote. “We know amalgamation is a very expensive exercise and we do not know how much this is going to cost.

“The State Government could give us more information but they won’t. “I am not going to fall on my sword for peanuts,” Cr Scott said when comparing the $20 million funding on offer with the over $700 million turnover of the existing councils. “I will say no to the bullies,” she said.

Cr Jim McFadyen added: “I will not be supporting this motion or selling out the majority of the community or council staff; let’s tell this Government to get stuffed and not roll over.”

He asked CEO Mr Paul Anderson if the minister for local government had been prepared to give any written undertakings in his meeting with the Coast’s mayors and CEOs.

“The minister made it clear at the meeting that he wasn’t going to give any answers in writing, but the number of people in the room, including the member for Terrigal, meant there were enough people to make sure he had a process and didn’t suffer from a memory loss,” Mr Anderson said.

Gosford mayor, Cr Lawrie McKinna noted that during his three years on council, its financial position had gone from an $8 million deficit to a $36 million surplus.

“This council, in my opinion, is fit for the future, so I never thought we would have to worry about any amalgamation. “At the meeting last week, it was very clear they will force us, which is wrong, but looking at what is happening in Gosford, if we do agree to amalgamation, we can work with the Government to get the best outcome for the community.”

Cr McKinna said he realised he had made an about-face and that for years he had considered Gosford “too big and too good” to be forced to merge.

In closing the debate, deputy mayor, Cr Craig Doyle said: “The state government are the ones who have plundered (sic) us down this path, so let’s attribute the blame where it belongs.

“As the mayor says, this should not have been contemplated. “I personally don’t believe they have a mandate for this, they should have taken it to the electorate and had a poll.

“Then they could have sat back quite comfortably and said yes, they have a mandate, but at this point they are ramming it down our throat.”

Cr Doyle said that much of what Mr Toole said in the recent meeting did disarm him, particularly statements about ensuring Gosford Council’s ability to deliver its existing program through to 2017 and ensuring current counsellors would have a seat at the table in forming the new council.

He said the alternative was to stand alone, have the councillors removed and replaced with an administrator and have no say. Cr Jim McFadyen called for a division following the vote, so it would be officially recorded that those voting in favour of the motion were Cr Jeff Strickson, Cr Craig Doyle, Cr Gabby Bowles, Cr Chris Burke, Cr Bob Ward, Cr Deanna Bocking and Cr Lawrie McKinna.

Those voting against the motion were Cr Jim McFadyen, Cr Vicky Scott and Cr Hillary Morris.